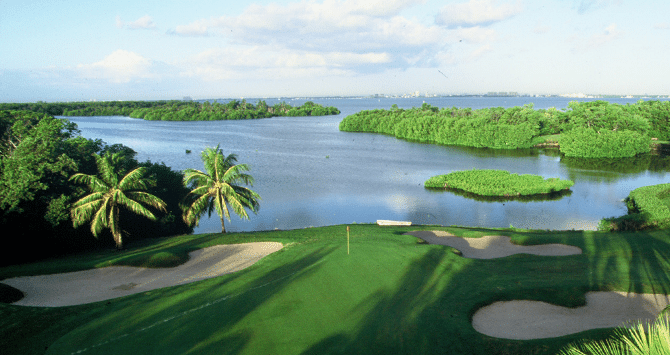 Florida has a reputation as home to some of the best golf in the country. It's home to many golf organizations like the PGA Tour and hots several high-profile golf tournaments. Whether you are a resident of South Florida or snow bird coming to the south for the winter, I hope this article highlighting the 5 Best Public Golf Courses in South Florida is helpful to you.

Unquestionably one of the most expensive rounds in South Florida, but well worth it. There are two golf courses on site in impeccable shape here in Aventura. Originally designed by Robert Trent Jones Sr. and then eventually redesigned by Raymond Floyd. This resort has been ranked 4 ½ stars in Golf Digest and has been one of Golf Week’s best resort courses multiple times. You will encounter contoured fairways, doglegs, carved bunkers, and strategically placed water hazards. Be sure to bring your ball retriever! My favorite of the two courses is the Soffer Course although some people would argue the Miller Course could also be named on the list of the the 5 Best Public Golf Courses in South Florida. Learn more about Turnberry Isles Golf

The Honda Classic is annually known as one of the hardest stops of the PGA Tour. The Championship course at PGA National Resort was originally designed by Tom and George Fazio, but redesigned by Jack Nicholas in 2014. The course is always in great shape, fast TifEagle greens, water hazards lurking arounds every corner, a must play for every avid golfer. Holes 15, 16, and 17 are known as The Bear Trap. They are 3 of the most demanding holes played on the PGA Tour. When you get to hole 15, the beginning of the Bear Trap, make sure to take a picture with the roaring Bear when you're here in West Palm Beach! Learn more about PGA National

Located just 10 minutes from downtown Miami, 18 holes of championship golf. This was the site of the Senior Pga Tour for 18 years. Crandon Golf at Key Biscayne was originally designated in 1972 by Devlin/Von Hagge. It was later redesigned by Von Hagge in 1993. This is one of the top public courses in America. The course has been rated by Golfweek as a top 10 course and as one of America’s top 75 upscale courses by Golf Digest. Mangrove lined fairways, fast greens, and sites of Biscayne Bay make this a fantastic spot for a weekend tee time. Stop on hole and take a picture of Downtown Miami. Learn more about Crandon Golf

36 holes of Championship golf here. Fairways and greens are gorgeous! It’s been rated 4 Stars by Golf Digest and host to many PGA, USGA, and FSGA Championship Events, the East and West courses set the scene for a relaxing round with friends or a challenging round at a competitive golf tournament in Plantation. It’s reasonably priced, which makes it a fantastic course for weekend warriors. Both courses are worthy of being named one of the best public golf courses in South Florida, but I prefer the East Course personally espepcially since it went through a full renovation in 2020. Learn more about Jacaranda Golf Club

Doral in Miami has always had a rich history. It was first opened in 1962 and has been the host of the WGC Cadillac Championship since 2007. Donald Trump purchased this resort in 2012 and completely redesigned the golf course in 2014 with the help of golf course architect, Gil Hanse. The course boasts 7,590 yards, has strategically placed bunkers, undulating greens, and flowing fairways. Its famous 18th hole, the Blue Monster, is typically ranked as one of the hardest finishing holes on the PGA Tour. Learn more about Trump National Doral