How to Hit ANY Bunker Shot 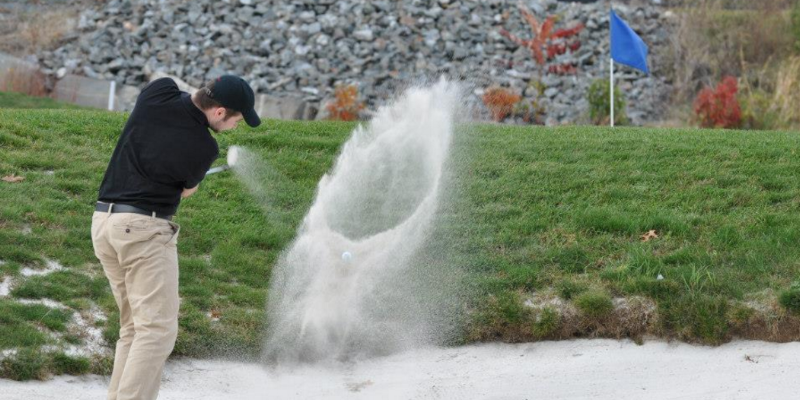 Sand traps have always been a staple of golf; they’re a constant at every golf course ever built. Whether it’s the fluffy beach sand of Kiawah or the pot bunkers of England, effectively getting up and down from greenside bunkers is a must for low scores. Many players dread greenside bunkers because they do not know the best way to hit out of them. Their set-ups are often inconsistent, their swing paths are incorrect, and their ball position is off. For consistent play in any aspect of the game, you need confidence: you don’t want to step into a trap worrying about getting up and down. The swing thought should be, “I WILL get this up and in.” In order to gain this confidence, you must first learn and practice the most effective way to hit it close out of greenside traps. Here’s how to do it:

If you short-side yourself in a greenside bunker (meaning you don’t have a lot of green to work with), you want to pick a high-lofted wedge, like a 60 degree lob wedge. The ball will not role out as much. If you have some green to work with, you want a lower lofted wedge, such as a sand wedge (56 degrees) or a gap wedge (around 52 degrees). This will promote a slightly longer ball flight out of the trap. Just because only one wedge says "sand wedge" on it does not mean that is the only club you should be using to hit out of a greenside bunker.

Step 2: Take the Right Set Up

The right set up is the key to hitting an effective shot from the bunker. First, dig in: twist your feet into the sand. Besides having a good base for the shot, which is vital, you get a feel for how deep the sand is around your shot.

Next, open your stance AND the clubface. This is very important. This promotes a higher, softer ball flight and allows a good angle for the clubface to slide under the ball.

Finally, you need your weight on your front foot. The weight should be about 80%-20% favoring the front foot. This is vital as it causes a steep decent, creating the splash of sand (the digging) and backspin characteristic of a good bunker shot.

Now that you are dug in, with the ball forward in your stance, your weight on your front foot, and with your stance and clubface slightly open, it’s time to pull the trigger. You want an outside-in swing path with a slight wrist hinge at the top. How far back depends on how far you want the ball to fly. This swing path gets the ball to come out high and soft and with the maximum control. You will need to practice this until it feels natural and to judge the yardages correctly.

You must follow through and stay down longer on sand shots. If you decelerate or stop at impact, you chunk it. In a greenside bunker, you want to splash the ball out, and to do that you must have a steep swing and a high follow through. If you come up on it too soon, you’ll catch the shot thin and blade it. Don’t be afraid to take a slightly bigger swing; you are taking sand with the shot. It won’t go as far.

Once you are confident in your greenside sand shots, it’s time to get a little more technical. Two kinds of sand shots that we commonly face on the course are the medium-length sand shots (the 25-25 yard shot to the green), and the plugged ball. These are two of the hardest shots in Golf, but don’t be afraid of them. You hit them exactly like normal greenside shots with only slight variations.

If you need more personal instruction, I suggest finding a PGA Professional for coaching in your local market. 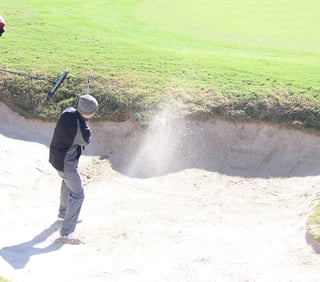 Golf course architects love the longer bunker shots and the challenge they pose. They are very difficult shots to judge correctly, but there is a very simple way to handle them: hit more club. Take a greenside set up and swing, but instead of a sand wedge, take a pitching wedge or low iron and take a fuller swing. You still want to hit an inch behind the ball and get that splash out of the trap; the greatest misconception about longer bunker shots is that you have to hit ball first with these kinds of shots. While this is one way to play the shot depending on the length and lie, it is often very difficult to pick the ball completely clean. Many golfers either chunk it or blade it with no control when trying to pick it clean. By taking more club, you can take a comfortable swing and not worry about hitting the ball absolutely perfectly. Other than taking more club, everything else is the same as a greenside bunker shot. If you need a little more length, you can square the club face. The ball will fly slightly further with a lower trajectory. As long as you set up like you would for a greenside shot, all you need on these longer shots is more club.

For those golfers who hit the ball high, plugged balls in traps are not uncommon. The Fried Egg as its sometimes called is extremely difficult to control, and the only thing to think about when hitting the shot is “DIG!” Shots like these depend entirely on the lie, but 9 times out of 10 you need to dig the ball out of its impact hole. There are 2 ways to do this, and which one to choose depends on if you have to clear a lip or not. If you don’t, the best way to hit the shot is to shut the face on a high-lofted wedge and take a big swing. You want to get very steep with the shot so the leading edge of your wedge digs into the sand and gets under the ball. This may require you to swing slightly harder at the ball as you are taking a lot more sand than you normally would, but you must follow through as you would any other shots from the bunker.

If you DO have a lip to clear, you can keep the face open but you MUST dig deeper. When you open the face on a plugged ball, the chances of blading it increases because the club doesn’t dig into the sand as much. So to hit the “high” plugged ball shot, one of the most difficult shots to pull off, you have to take a big swing and take a lot of sand. It is important to note that with any fried egg, the ball is going to run out a lot more than a normal shot from the bunker, so you must pick an appropriate landing zone to allot for the ball running out.

Some of the hardest shots we will face on the course come from bunkers, and knowing how to hit these shots gives us the best chance to save a low score. Follow these tips and you’ll be making sandies like the pros. And if you need a place to test out your new found talent, check out the amateur golf tournaments offered by Nextgengolf.

**Bob Bonney is a former club golfer at the College of William & Mary.

Previous article
How to Putt Like the Pros: Do the "Around the World" Drill
Next article
Teach Me How to Dufner