Here at the NCCGA we hear all kinds of challenges that club golf teams face each season. One of the most common problems we hear about semester after semester is funding. Many teams don't receive funding support from the school, or only receive a small amount, leaving the team to foot the rest of the bill. Fundraising for your team can seem daunting, but it doesn't have to be!

We have seen and heard all kinds of great ideas from teams around the country. These ideas have ranged from extremely simple to execute, to moderately difficult (but financially worth it). These fundraisers do a great job of bringing in money to support the club's expenses, but are also fun to do as a team. After all, you can’t spell fundraiser without FUN (corny joke, I know).

Here are 6 fundraiser ideas we've heard from club golf teams across the country: 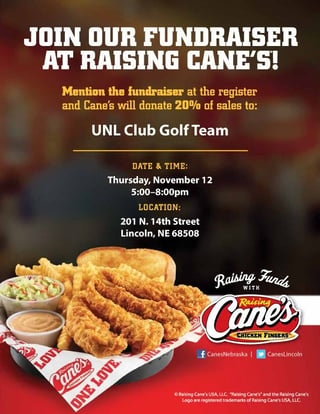 Partnering with a local restaurant is a great way to have fun with friends over dinner while still bringing in money for your squad at the same time. Some restaurants will offer to partner with your club to share a certain percentage of profits that the restaurant earns from a specified period of time (ex. 6pm-8pm). All you have to do is have your team spread the word and encourage their family and friends to go eat at the restaurant during the specific block of time. The more people you have out to eat with you, the more money your team will earn.

The University of Florida kills it each semester with a bake sale. Luckily they have someone who is really good at making delicious snacks to sell to the hundreds of students passing by. This is a delicious way to help raise money, just make sure your teammates don’t eat all of the product.

This is a great idea that I heard when I was a club president. A local restaurant was very excited to host a rock paper scissors tournament. The team would charge $10 for each entrant, the restaurant would run a buffet and the team members would run the competition. This is a really fun way to get a lot of people involved in a cool activity and to help support your organization. 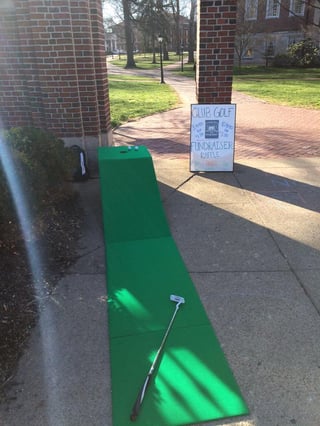 The Ohio University club team bought a putting green carpet, crafted a difficult uphill putt, then took it to the busy College Green area on campus. They sold putts for $1 to students, with the chance to win a prize if they made it. The $1 price meant the large majority of students would be able to take part, and the fact that it was a single putt made it very easy to do on the go.

The prize can be a fun club golf related item (such as a hat, shirt, etc.), or also a raffle ticket for a much larger prize (such as a Yeti cooler). These prizes can be donated or purchased from club funds, just make sure you plan ahead and don't cannibalize the funds you're raising.

This is also a fun way to get students on campus a taste of golfingand what makes it great.

The University of Delaware runs a golf tournament each year to fund their relationship with the local golf course. The team gets free rounds at certain times of the day throughout the week at the course, and in return the team runs a large 100+ person tournament with all of their members with 100% of the funds from that event going straight to the course. This is a fun way to get out on the course with a large group of people and develop a great relationship with the local course.

A few other club teams will offer to work a golf tournament at their local course, helping provide staff at the event in exchange for free or reduced greens fees. You can also try and turn it into a club fundraiser by offering to sell mulligans for $1 each on one of the holes (with the course's permission, of course). 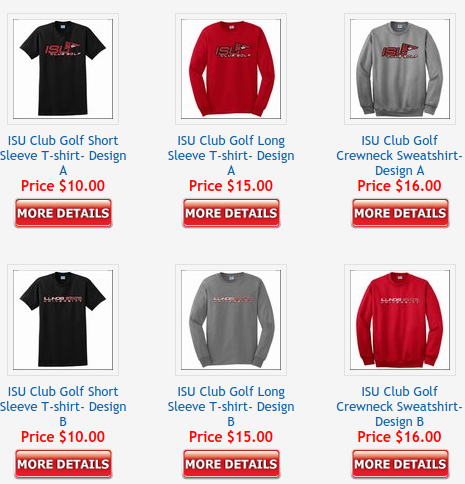 The Citadel Military College of South Carolina runs this fundraiser each year and says they have had a ton of success with it. The team says they noticed it can be hard to find clothing and other items with the school logo on it. They also know that alumni are extremely passionate about the school and love to wear gear with the Citadel logo. So the club golf team takes advantage of the apparel and golf equipment discounts they get from being members of the NCCGA. They buy logo'd shirts, golf balls, and other things at a cheap price, and then sell them at a higher cost on Homecoming weekend to alumni looking to represent their College.

The Illinois State club golf team ran a similar fundraiser in the Fall of 2015, however they partnered up with Select Spiritwear to sell the apparel. This allowed to club to make money selling club apparel, without having to take the risk of pre-buying all the apparel and hoping it sold.

There are a ton of other ideas that would be fun and effective ways to bring in money to help support your team. The only limit is your creativity, as we hear new fundraising ideas every semester from teams thinking outside the box.

The biggest thing to remember when organizing, promoting, and running your fundraiser is to communicate why your team needs money by explaining the costs associated to running the team. People are much more willing to help out when they know what they are supporting, and why. Don’t forget to be enthusiastic and have fun!