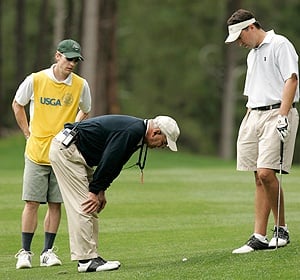 This week, Club Golf Academy will address what happens when your ball moves, either by accident, the fault of your playing partner, or Mother nature. For example, what would happen if a fox ran onto the green, scooped up your ball off of the green, and ran away with it, sort of like this:

Rule 18 covers scenarios where a ball at rest is moved.

“If a ball at rest is moved by an outside agency, there is no penalty and the ball must be replaced.” Note: It must be known or virtually certain that an outside agency has moved the ball. In the absence of such knowledge or certainty, the player must play the ball as it lies or, if the ball is not found, proceed under Rule 27-1 (penalty of stroke and distance).

18-2a: Except as permitted by the Rules, when a player’s ball is in play, if the player or his partner

18-2b: Ball moving after address

18-4: Fellow-competitor or equipment in stroke play

"If a fellow competitor or his equipment moves the player’s ball, touches it, or causes it to move, there is no penalty. If the ball is moved, it must be replaced.”

This rule creates the provision that if a ball in play and at rest is moved by another ball in motion after a stroke, the moved ball must be replaced and the ball that was in motion should be played from where it came to rest.

Note: some parts of the rules were shortened or modified because caddies are not allowed in NCCGA tournaments

Be sure to send your Rules questions to Club Golf Academy via nick@nccga.org. We are here to help you learn the rules and make golf a better game.