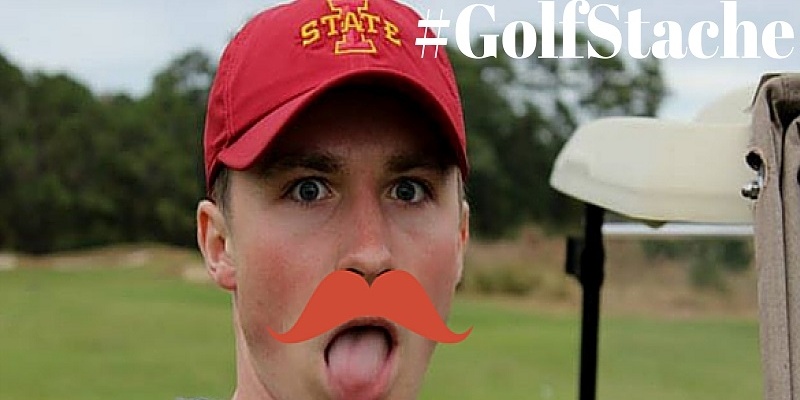 In partnership with the Testicular Cancer Foundation, Nextgengolf and the NCCGA will donate $1 for every tweet or Instagram post with the hashtag #GolfStache. Testicular cancer is a curable disease and is the most common cancer among men ages 15 to 35.

There's now just one week remaining in the NCCGA fall 2014 regular season, and 22 teams have officially earned bids to the National Championship at Dancing Rabbit Golf Club. It's time to perfect that golf swing and fine-tune your 'stache game.

To recognize those who support the cause, here are this week's #GolfStache power rankings:

5. Eric McCabe of Idaho: It's hard to tell from the picture, but judging by the 'stache, Eric is driving a white van. No disrespect, mine doesn't look any less creepy.

4. Matt Colaizzo of Duquesne: Looking dapper in deed. Don't let anyone tell you that ladies don't love the #GolfStache.

3. Mike Pyne of Delaware: Payne makes his second appearance in the #GolfStache power rankings with an epic sunset, shades and a smoke. Well played, sir.

2. Justin Nicol of Ball State: Is that a beard or the rough at St. Andrews? Justin must be waiting until Ball State wins a bowl game to shave.

In honor of #GolfStache here is a photo from last year. @singlejingles Look for an updated photo in the near future. pic.twitter.com/R0DisJ3gjL

1. The Starter from Shining Rock Golf Club: If this isn't a picture-perfect old man #GolfStache, I don't know what is. Our friend bares a striking resemblence to the Lorax, I might add.

**Chase Russell is the student president of the NCCGA and a member of the Iowa State club golf team.