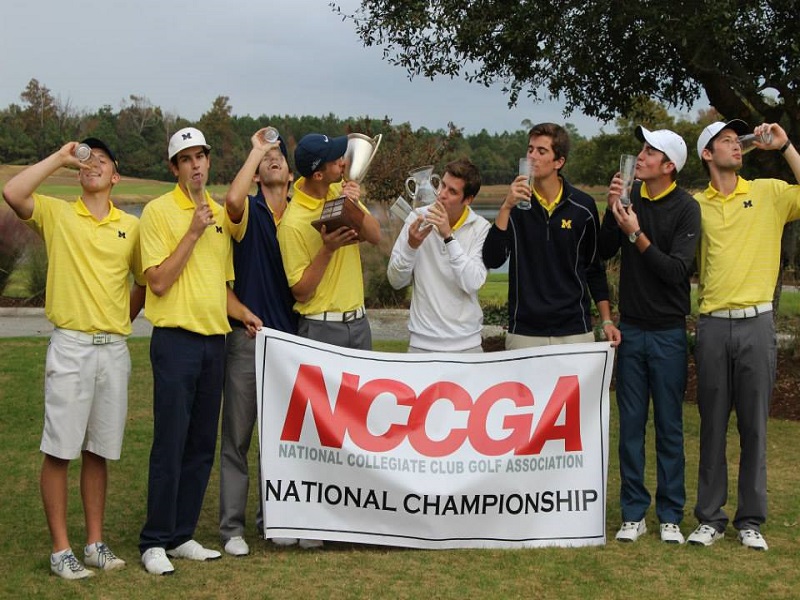 The NCCGA Midwest Region hosted its first regional tournament of the 2013 Fall Season at the Legacy Golf Club in Ottawa Lake, Michigan. We had amazing weather for the event and the course could not have been in better shape--the greens rolled like glass and the Arthur Hills’ design provided a fair challenge. The eighth hole in particular quickly became one the course’s highlights. The island green par 3 saw many water balls, but gave each player a fun test for the weekend.

During the first round, Mr. NCCGA President himself, Kevin Hamori, made his first hole-in-one at the par 3 thirteenth, foreshadowing his great play for the rest of the tournament. After the first round, we had our usual tie atop the leaderboard between the Wolverines from Michigan and the Buckeyes from the Ohio State University. The Redhawks from Miami of Ohio followed closely behind. As the tournament progressed, the teams from Michigan and OSU were unsurprisingly paired together in round two, as was the case in the final round of three of last year’s four regionals. Except for the top three, the rest of the teams played closely together as each looked to make a move in round two.

There was a slight chill in the morning for round two, but the sun was shining and we once again had an amazing golf course ready for us. The Buckeyes, led by NCCGA President Kevin Hamori, started strongly, while the Wolverines struggled coming out of the gate. Miami made a second day charge, as did the team from Michigan State, who was trying to to earn some qualifying points for Nationals. On the back nine, Michigan saw great play from their squad. Rookie Tom Fleming and veteran Steve Barbour led the team; Troyer, Grigg, Welsher, and Reynolds (me) also played well. With both leading teams playing well, pressure mounted going into the last few holes.

After anxiously waiting for all the scores to come in, we finally found that the Michigan Wolverines pulled out a slim victory over the charging team from Miami while the Buckeyes finished a strong third. There were many great scores, especially from our medalist Kevin Hamori. Hamori’s stellar play was punctuated by his first ever hole-in-one on 13. "My round was not going as well as I had hoped and I was waiting for that big shot or putt to give me some momentum. After I hit the shot on 13 and watched the ball roll up and disappear I couldn't believe it. This was exactly what I needed to turn around my round and I was able to carry forth this momentum into day 2. I can only hope that the momentum carries into the next Regional Tournament,” said Hamori after the conclusion of the tournament.

Rounding out the rest the all-tournament team were Steve Barbour, Tom Fleming, and Nick Reynolds (me) from Michigan; Thomas Byrne from Miami; Steve Schniegenberg from OSU; Matt Chalberg from Ohio; Ryan Denney from Cincinnati; and Jeff Nemesi from MSU. Michigan’s new club president, Geoff Welsher, reflected upon the tournament saying, “This is a big win for us especially after our final round troubles last year. We’ve got a solid team this year and this win will go a long way for Nationals qualifying.” With this win the Wolverines earned six points towards Nationals qualifying, Miami earned three points, and the Buckeyes earned one. The next regional at Eagle Crest Golf Club should provide some fireworks, as many teams continue to vye for a trip to the National Tournament.