The final two weekends of the college golf club season are finally here, and it's a big push with 41 regional tournaments over the next 9 days. Over those 9 days, 29 team bids to the NCCGA National Championship will be awarded along with all eight individuals. It's a whirlwind and we're here to preview all of the action.

Now a look at this weekend's tournaments: 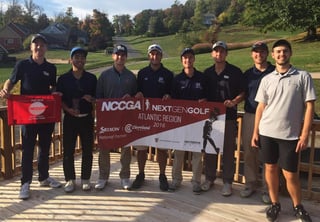 Pittsburgh has qualified for the National Championship every single semester since Fall 2012, so it would be safe to call them the favorite in the Atlantic, until another school proves us wrong.

In the fall Penn State, Robert Morris, West Virginia, and Akron all had respectable scoring averages of about 400 per day, proving any of the teams have the ability to give Pitt a run for their money or knock them off this semester.

The Capitol Region in 2016 saw the rise of Maryland as they won 3 out of the 4 regional tournaments and traveled to Nationals both semesters. Entering the Fall National Championship at Disney ranked in the bottom half of the field, Maryland made some noise on Day 1 finishing T-6th, but unfortunately had to bow out on Day 2 due to a scheduling mishap. Led by Congressional CC Club Champ John Brundred, and NCCGA President Grant Johnson, the Terps look to continue their streak and take home the region for a third straight semester. This won’t be done without some pressure from Georgetown and Towson, both hungry for a trip to nationals.

The Colonial Region played their first tournament last weekend in Williamsburg, with Liberty knocking off defending champ James Madison by 14 shots. Joe Lakey, David Schmidt, and Austin Northern took home all-tournament team honors along with the 6 points for their team. It will get very interesting this weekend at Glade Springs, as South Carolina will be joining the region temporarily. The last time South Carolina played these courses at Glade Springs they set the NCCGA National Championship scoring record.

Assuming that South Carolina wins the event, Liberty can secure their bid to Nationals with a 3rd place finish (regardless of stroke differential). Don’t count JMU out though, as they have found success at Glade Springs in the past too, placing 4th out of 30 teams in the championship.

The Great Lakes experienced cold and windy conditions for both of the Fall tournaments resulting in higher scores than expected. Illinois State won the region for the fourth straight semester, with DePaul placing 2nd in both events. Since the start of 2016 the two schools have been separated by an average of less than 5 shots per round.

This weekend's tournament will be taking place at Heritage Bluffs in Channahon, Illinois. It is known as one of the best courses in central Illinois, and has played host to numerous large events such as a 2014 US Amatuer Qualifier.

In the fall Indiana-Bloomington and Purdue were separated by a total of 2 shots. Indiana claimed the first tournament by 19 strokes, 2 weeks later Purdue won at their home course by 17 strokes, falling just short of a bid to Nationals via the tiebreaker. The teams ranked 22nd and 23rd in the NCCGA team rankings, respectively. Notre Dame also broke 400 in all 4 of their rounds in the fall, and was within striking distance in both tournaments.

Indiana placed in the top 15 in both the spring and fall championships, placing T-6 at Glade Springs and T-14 at Disney. Zach Stark led the way for the Hoosiers in the fall ending up as the 89th ranked player in the country with an impressive scoring average of 75.25. Stark topped that off with a 22nd place finish in Disney.

In the fall Fairfield and Lafayette each claimed one tournament title, Fairfield won the region as Lafayette only attended one tournament. Southern Connecticut and Sacred Heart each were within 25 shots at both tournaments, making the Metro one of the tougher regions to predict this spring. Evan Kenagy was the top ranked golfer (55th nationally) in the region last semester with a scoring average of 72.5.

Fairfield ended up placing 26th out of the 30 teams present at Disney, and are looking to build off of that this spring.

This weekends tournament will be hosted by Oxford Greens Country Club in Oxford, Connecticut, where the temperatures look to be a little rough on Saturday (High of 40), but much better on Sunday. 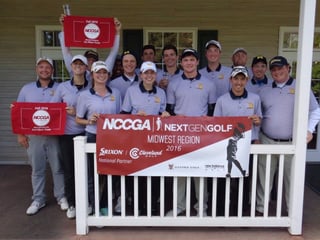 In the fall Michigan-Ann Arbor returned to their old ways, winning both regional tournaments. In the first tournament Michigan went 1-2, the Wolverines B team claimed 2nd place, giving them both trophies for the weekend. Michigan also claimed 8 of the 16 individual all-tournament team honors in the fall. In Disney they ended up in 11th place out of the 30 teams, led by an all-tournament team effort from Zeeraq Rana (T13). Luke Stull also fired 2 rounds in the 70s to finish in a tie for 33rd.

Michigan State finished the fall season with a sub 400 scoring average, and Ferris State won the region last spring so Michigan still has some work to do before they punch their ticket to Arkansas. Tough competition and even tougher weather always seem make the Midwest region very difficult.

Colorado State claimed both regional tournament titles in the fall, the first tournament the Rams won in dominating fashion by a total of 37 strokes. In the 1st round of the second regional Northern Colorado jumped out to a two shot lead over CSU, but the Rams bounced back on day two and ended up taking home the title. CSU’s Tyler Bricker, Adam Serbousek, and Andrew Cooper all finished up the fall with a sub-80 scoring average.

Unfortunately, CSU was not able to attend the Championship in Disney, and Northern Colorado represented the Mountain region with a 28th place finish. Sean Kato and Rammi Hazzaa both finished in the top 65.

This weekend's tournament will be played as a 1-day, 36-hole event due to inclement weather, and will feature golfers from 6 different schools in Colorado.

In the fall, Providence and Connecticut each took home a regional tournament title, but Connecticut ended up winning the tiebreaker by 16 strokes. In Disney, Connecticut ended up finishing in a tie for 14th place led by an all-tournament team performance from Michael Thibodeau with an impressive two day total of 151 (77-74). Drew Brennan and Shane Baldwin also finished in the top 100, respectively.

This weekend's tournament has been changed to a 1-day, 36-hole event on Sunday, and will feature club golfers from 11 different schools, including the NCCGA debut of Bryant University! Nextgengolf CEO, and Bryant alumni, Kris Hart must be proud. 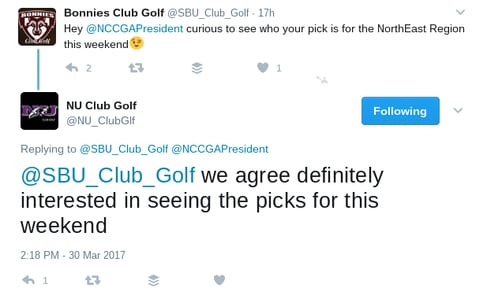 This weekend's tournament will be hosted by Ravenwood Golf Club in Victor New York. Both Niagara and St. Bonaventure seem eager to knock SUNY Cortland off of the Northeast throne.

The North Florida region is one of the best regions in the country year in and year out. Although it does not have the size of some of the other top tier regions, it definitely does not lack talent. Florida and Florida State each qualified for both National Championships in 2016. At Glade Springs, Florida finished 8th while FSU placed 19th and in Disney this past fall FSU finished T-3 while the gators ended up in 10th.

In the fall, the Region had 9 of the top 100 golfers in the country which is very impressive considering the largest field size was only 39 golfers. Florida State ended up getting the better of Florida in their three meetings in the fall (including nationals). Florida is looking to change that this spring.

Wisconsin-Madison claimed all three regional tournament titles in 2016 (spring #1 cancelled), with Marquette placing 2nd in all three. Wisconsin placed 21st and 14th in the National Championships this past year, which is impressive considering they do not get near as much outdoor practice as their national competition (especially in spring) due to Wisconsin's weather. In the Championships, the Badgers were led by Joey Levin who placed 33rd in Disney, and CJ Fritcher who placed 33rd at Glade Springs.

The North Region will feature golfers from 9 different schools this semester, including an All-Women's team from Wisconsin-Madison making their debut.

In the fall, Dayton returned to the National Championship for the first time since NCCGA Commissioner Matt Weinberger was leading the team and in the role of NCCGA President. After coming up 1-shot short of Miami of Ohio in the 1st regional, the Flyers rebounded with an 18 stroke victory in regional 2. PJ Greene lead the way claiming medalist honors after firing a 71 both days for a total score of 142. Josh Rinear ended up placing 22nd at Disney leading the Flyers to an 18th place finish in the Championship.

The Ohio Valley is one of the largest regions in the country, with some tournaments reaching over 100 golfers. It is also one of the more competitive regions. In the last 4 semesters, 4 different teams have won the region: Dayton, Ohio State, Miami of Ohio, and Cincinnati.

This weekend's tournament will take place at Walden Ponds Golf Club in Hamilton, Ohio. It will feature golfers from 8 different schools. 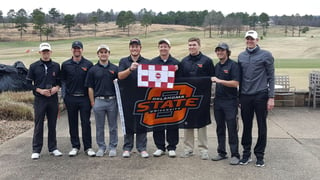 Tulsa was the early favorite in the Ozark heading into week 1 of the NCCGA season, after winning the region in the fall in their first semester as a club.

However, Oklahoma State flexed their muscle and came out victorious in Regional 1, edging Arkansas Tech by 7 shots. Matthew Sullivan and Stephen Allen led the Pokes with two day scores of 153, which earned them both all-tournament team honors.

The Ozark is always a competitive region that seems to have a fair amount of talent. Arkansas, Oklahoma, and Tulsa have all shown in the past that they are capable of winning any event, so a comeback is very possible. But, It does not look like Arkansas Tech will be fielding a full team for this event, so barring anything unforeseen it looks like Oklahoma State should be punching their ticket to Hot Springs on Sunday.

Villanova edged out Delaware in both regional tournaments in the fall, after Delaware won the regional title last spring on a 6th man tiebreaker. Nova was led by incredible play from Tyler Stahle who finished 1st and 3rd in both regionals, and followed up regional play with a 37th place finish at Disney.

This semester's tournaments should be some of the better ones in the NCCGA, especially out of colder weather regions. On top of great team play, the region also features Blake Reifsnyder from Kutztown who qualified as an Individual for fall nationals and is also the current holder of the Nextgengolf Spring Break Open title and the City Tour Nationals Scramble title. Former NCCGA President Matt Hahn is also playing in his last semester.

The South Florida Region was dominated by Keiser in 2016, as they claimed 3 of the 4 regional titles. Florida Atlantic won regional #2 in the fall to tie Keiser on points for the regional title, but Keiser won the tiebreaker on stroke differential. Keiser ended up finishing 9th at Disney, led by a 22nd place finish from Christian Brown. The region also ended up sending 3 individuals to the championship Daniel Robinson (UCF), Anthony Pascua (FGCU), and Kyle Kubala (FAU).

This weekend's tournament will be hosted by Sandhill Crane Golf Club, in Palm Beach Gardens Florida.

Last semester rivals Iowa and Iowa State tied the first regional tournament, in a shortened event. In the second tournament Iowa won by 16 shots, and earned a bid to Disney. Nick Rouches led the Hawkeyes in regional play with a 73.25 stroke average and was ranked the #11 individual in the country.

Bobby Frazzini and Alex Beversdorf from Minnesota-Twin Cities also ranked in the top 20 in the country, and earned individual bids to Disney where they finished T-62 and T-84, respectively.