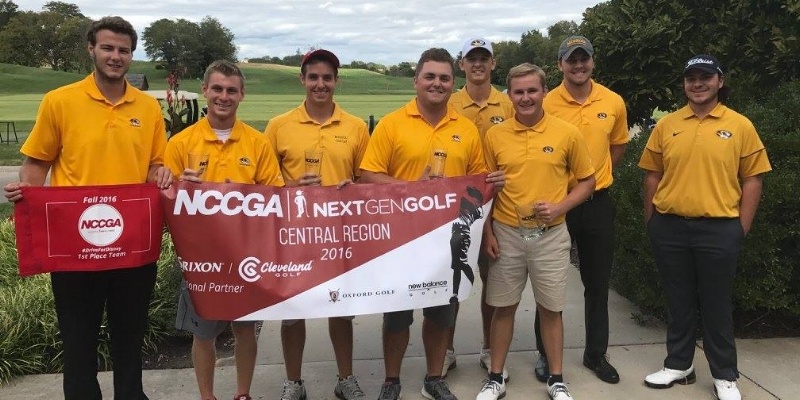 The Spring NCCGA season continues this weekend with four tournaments, as four more regions kick off their college golf season. Last week four teams took the first step in qualifying for this season's National Championship at Hot Springs Country Club. Who will join them this week?

Before we dive into the previews, here's who the NCCGA Student Leaders (and guest selector Mike Dunphy from Srixon) selected to win the region, and finish second. Note: These picks are who will win the region after completion of both tournaments. These may differ from the Student Leaders' week-to-week tournament picks. 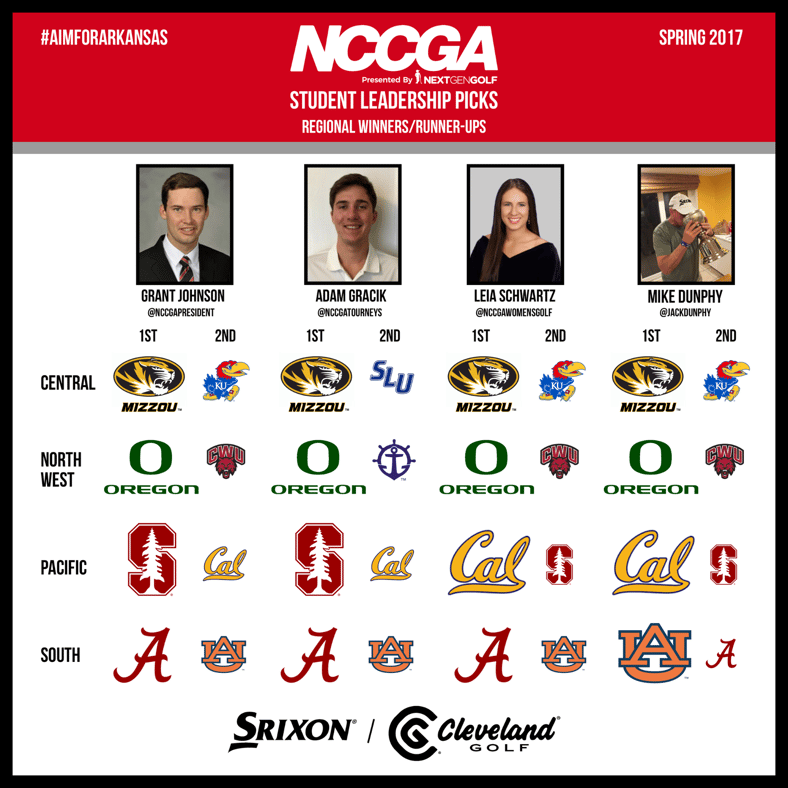 After winning 10+ Central Region tournaments in a row, it's safe to say Mizzou will be the favorite yet again this spring. Mizzou had two golfers ranked in the top 15 in the Fall 2016 rankings, Nick Sobba (9th) and Mark Stahlhuth (13th), and Sobba recorded one of the lowest rounds of 2016 in the NCCGA with a 65 (-7). Mizzou also finished in the top 10 in both national championships in 2016.

This weekend's tournament will also feature Evan Hussey (SLU), and David Lee-Tolley (Washington U) who both individually qualified for Nationals in 2016. Hussey finished T-62 at Disney this past fall, and Lee-Tolley finished T-43 at Glade Springs.

Kansas, Missouri State, Mizzou, Saint Louis, Truman State, and Washington University will represent the Central Region this weekend at Aberdeen Golf Club in Eureka Missouri. The temperature is projected to hit the high 60s both days so we could see some low scores.

Even though the Northwest Region normally has one of the smallest fields in the NCCGA, there is still some serious talent. Northwest Regional Coordinator, Charles Sitton V of Oregon Club Golf, finished solo 2nd at Disney with a 36 hole score of +1 (71-74). Oregon ended up in a tie for 12th place at Disney after entering the tournament as the 4th ranked team in the country.

In the only Northwest tournament that took place last fall, Oregon's A and B squad claimed 1st & 2nd with Central Washington placing 3rd place. University of Portland will be playing in their 2nd ever tournament this upcoming weekend, and look to be the only team standing in Oregon’s way.

Cal-Berkeley claimed three of the four Pacific Region tournaments in 2016, making them slight favorites over Stanford heading into 2017. In the Spring of 2016 Stanford claimed 3rd place at Glade Springs, thanks to top 30 finishes from Sebastian Cardenas, Pavin Chayavivatkul, and John Rafael.

The Pacific Region will be playing all 36 holes on Sunday with a shotgun start at 8am Sunday and the 2nd round immediately following. 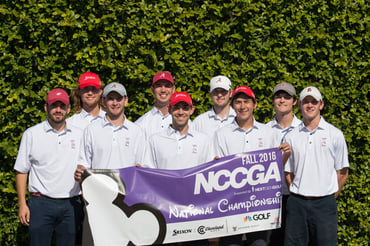 In 2016 Auburn and Alabama each claimed 2 regional tournament titles, but in both semesters Alabama ended up receiving the automatic bid to Nationals based on points and the NCCGA tiebreaker policy. In both National Championships Bama proved they are one of the best teams in the country finishing 2nd at Glade Springs and 6th at Disney, respectively.

Auburn finished in the top 20 in both the fall and spring seasons last year, and were the last team out in regards to natonals qualifying for Disney. The lofty rankings were thanks to solid play from Marshall Brown, Daniel Park, and Chase Hawthrone who all ranked in the top 100 in the fall individual rankings.

This weekend's tournament will also feature Clemson, who normally competes in the Southeast Region, and Tulane, from the Gulf Region. 13 different schools will be represented from 5 different states.