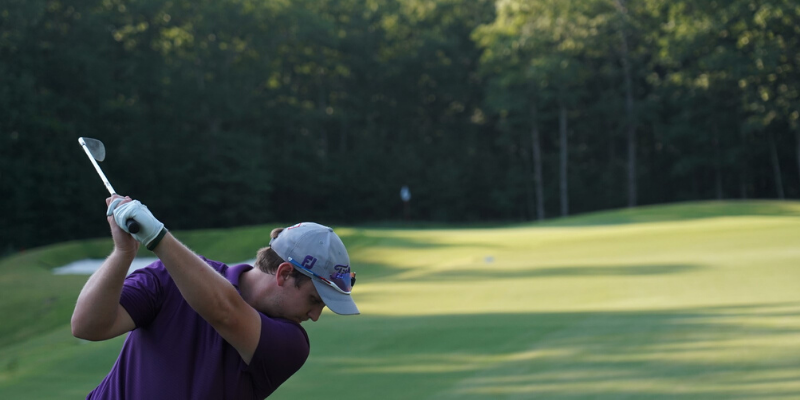 This article was written by Griff Jayne, a Senior at Furman University. The NCCGA is operated by Nextgengolf, a subsidiary of the PGA of America.  The NCCGA National Championship is a Player Ability Test (PAT) optional round. This is Griff's journey from when he first decided he wanted to work in golf to his decision to take the PAT at the Fall 2019 National Championship at WinStar Golf Club in Thackerville, Oklahoma. For more information about the PAT or the NCCGA, please email matt@nextgengolf.org.
I didn't always have a passion for golf, but from my first moment working at Chattanooga Golf & Country Club I was absolutely hooked.  worked at the club during my high school years and in college I got hired to work at a golf store in my hometown. This was probably the best job I could have asked for, and being around people who loved golf all day drew out my love for the game even more. Around this time I also met PGA Professional Brandon Arnold, who I created a great relationship with and was able to help turn my game around. I began shooting scores that I had never come close to shooting, and I went from "I hope I break 80 today" to being able to break par.

For the past two years, I have developed more and more of a love for golf. I was an average golfer in high school, playing as the number 4 or 5 man for the majority of my Junior and Senior years. When I got to college at Furman University, I learned that students were able to walk the Furman course for free on weekdays, so I decided to play as much as I could in an effort to improve.

Due to my golf store job, I also found a love for club fitting. Watching someone come into the shop go from initially hitting a 40-yard slice to bombing it thirty yards further with a nice draw ball flight was an incredible experience. I give a lot of credit to my coworkers though, as I learned more from the people who had worked at the store and been in the industry for so long than I could have ever learned on my own.
I returned to Furman for my senior year and decided to play club golf just for fun since I really missed the competitive atmosphere from high school golf. In the first tournament of the year, we played against South Carolina and Clemson. I learned when we got to the course that Clemson was the defending National Champions, which made me a little anxious. I played pretty well after shaking off the nerves, and after everyone had come in on Sunday I was ecstatic to learn that I had won the tournament by 1 stroke. It was a really cool moment, as I was congratulated by all my teammates as well as the guys from Clemson and South Carolina.
So from here on out, my confidence level really took a turn and I felt great about my game. I played in the next regional tournament and finished T-3rd. These finishes and scores were enough to allow me to qualify for the NCCGA National Championship as an individual, which allowed me to take the PAT (Playing Ability Test) during the event. Although I did not play nearly as well as I would have liked, I knew coming into Sunday that I just wanted to post a good score in order to pass my PAT. I finished strong and shot a tough 74, passing by 8 shots.

The main reason that I wanted to take the PAT was to open future doors to working in golf . I have known for the past year or so that I really want to go into the golf industry in some shape or form, but I'm still not sure what that might be. As mentioned above, I absolutely loved fitting people at the shop I worked at and helping them to find the perfect equipment for their swings, so I know I have a knack for swing instruction/coaching. I think I would enjoy being a coach at a collegiate level as well, or would even be interested in being a rep with a larger brand either through retail or through the PGA Tour.
Starting as an assistant or eventual head PGA Professional at a course seems like the best route for me, as this has always been an awesome side to the industry that I want to get into. Passing this PAT meant a lot to me, as I know that I've passed what is one of the hardest parts about becoming a PGA Professional. I'm hoping to complete the basic knowledge test this coming spring, and then hopefully will be hired at a course this summer where I can begin my apprenticeship.
Griff currently works at The Cliffs at Mountain Park and is working towards his PGA certification. For more info on ways that you can pursue a career as a PGA Professional, click here.