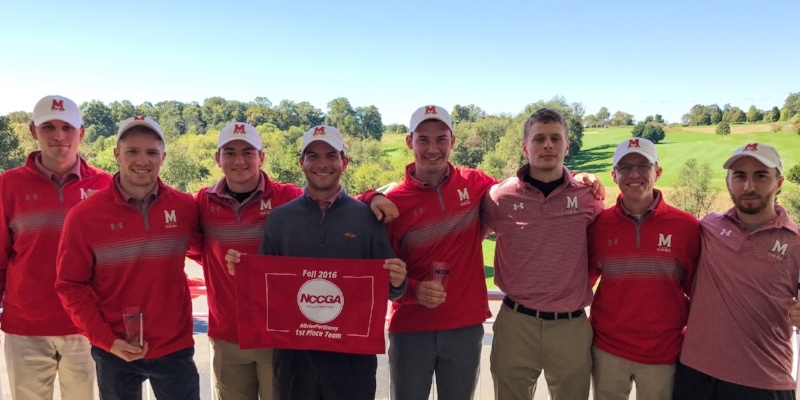 Congratulations to Maryland, Missouri, Iowa, and Wisconsin-Madison on officially winning their region and booking their ticket to Disney. It's a repeat trip for Maryland, Mizzou, and UW as they defend their regional titles from last semester. Iowa will be making its first trip to nationals since the Fall 2014 season.

Without further ado, here's the full rundown from the weekend:

Rain made an unwanted appearance at Little Bennet Golf Course for the Capitol Region finale, but the University of Maryland perservered through to sweep both tournaments. The Terrapins "A" squad shot 403-423 to finish 15-strokes ahead of second place Georgetown University. The Hoyas were led by medalist Christopher Gay's 74-83 (157, +13) performance. Maryland advances to their second straight nationals, and currently sits at #47 in the country.

The story of the final Central Regional was Missouri's Nick Sobba. Nick shot a remarkable 65 in Round 1, 7-under par. The score ties the (*unofficial) lowest under-par score in NCCGA history. NC State's Josh Rackley shot a 64 in 2012 on a Par 71 course to also finish at 7-under. Sobba didn't slow down in the second round either, shooting a 71 to finish 8-under for the tournament to win medalist by 9-strokes. His Tigers took care of business too, winning the tournament by 21-strokes to sweep the region. Missouri is making its 5th straight appearance at nationals, and is currently ranked #14 in the country.

*NCCGA records are mostly unofficial due to central records not being kept prior to 2010.

The first Midwest Regional of the season at Hawk Hollow saw the University of Michigan make a strong statement to begin the Fall season. The Michigan "A" team took home first place, while the Michigan "B" team finished second by a single stroke, and Michigan State placed third. Zeeraq Rana led Michigan as the medalist, shooting 78-75 (+9). The final Midwest Regional is October 22/23 at Meadows Golf Club at GVSU.

The Badgers from Wisconsin-Madison completed their sweep of the North Region last weekend at Golf Courses of Lawsonia. Madison shot team rounds of 383 and 389 to place first, followed by Marquette and then UW-Milwaukee. Nils Arneson of Madison earned medalist honors with rounds of 72-77 (+5). The Badgers will be making their second straight appearance at nationals, finishing T-14 at Glade Springs last season.

A streak was ended in the Twin Cities finale at Wedgewood Cove in Minnesota. Iowa State's run of 4-straight regional championships was ended by the Iowa Hawkeyes. After finishing the first tournament tied, with ISU earning the six regional points in the tiebreaker, Iowa stormed to victory in the second tournament by 16 strokes. Minnesota-Twin Cities finished in third, followed by Nebraska, and Minnesota-Duluth. Iowa's Nick Rouches earned medalist with a 72-75 (+3) weekend. It is Iowa's first appearance at nationals since the Fall 2014 season at Dancing Rabbit.