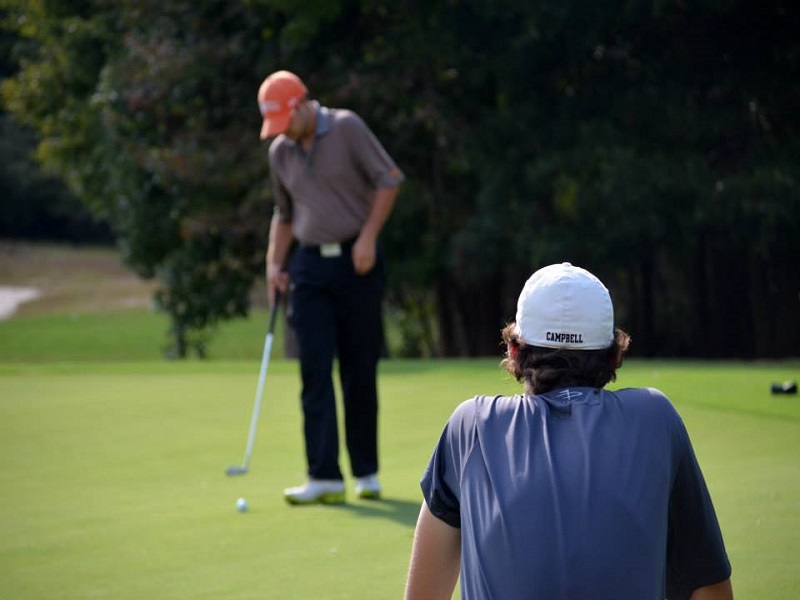 We had beautiful weather for the event on Saturday after some really good scores from NC State, UNC Chapel Hill, and Campbell at 367, 368, and 371 respectively. The forecast for Sunday was a different story and there was a tropical storm that passed through North Carolina overnight and put some serious water on the course. We played lift, clean, and place the second day and avoided rain except for a rough 20 minute stretch. 7 players were able to post scores under par on day 1: Smith Brinker and Shannon Paylor from UNC, Zac Lewis and Travis Bolick from NC State, Nick Gorma from Campbell, Matt Faulkner from UNC Wilmington, and Carey Bina from Wake Forest.

The team battle was seemingly going to come down to the wire on the second day. Campbell posted an impressive 368 on the 2nd day when all the other teams seemed to struggle much more. They were able to make a great comeback and win the region’s first tournament. UNC Chapel Hill was able to fend off a good second round from UNC Wilmington to claim second with UNCW finishing third. Carey Bina followed his 71 on day 1 with a 69 on day 2 to claim the individual title. The rest of the all-tournament team is as follows: Nick Gorma-142 (Campbell), David Anderson (UNCW) and Smith Brinker-144 (UNC), Will Dull (UNC) and Jordan Taylor (Campbell) and Zac Lewis-146 (NC State), and Peter Clarke-147 (Campbell).

I’m sure all teams are looking forward to our second tournament at Carolina National Golf Course near Wilmington, NC on October 12-13. This tournament will be another opportunity to gain some points for the national championship at Barefoot Resort in Myrtle Beach, SC. Any contenders must overcome strong Campbell (6), UNC (3), and UNC Wilmington (1) teams to get there.