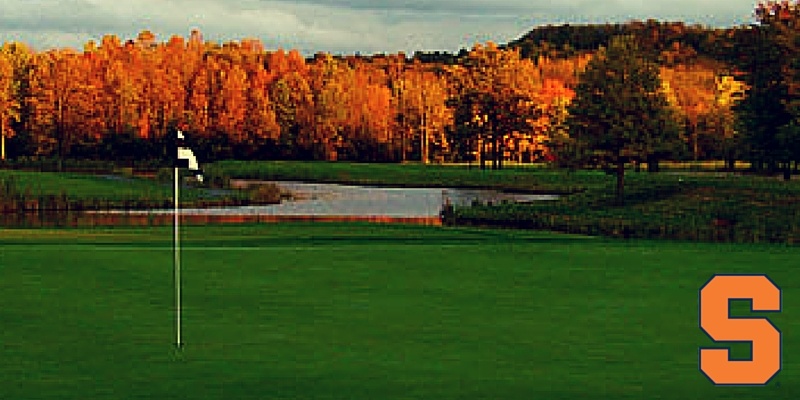 It was a weekend filled with rain, wind, and cold weather for the first ever NCCGA Northeast regional tournament. Being held in East Syracuse at the Links of Erie Village, all five of the competing teams knew that the weather could potentially be an issue, especially in October. Considering that some of the teams had never played each other before, neither team really knew what to expect.

What they got was a tournament shortened to 18 holes due to weather and a day where keeping high numbers off the board was a bonus. The Syracuse Orange ended up scrapping a win after turning in a 409 that was categorized by a 79 from club president Bram Berkowitz and an 80 from senior Scott Stegemann. The competition was close as Cornell turned in 412 and SUNY Brockport 413.

"It would have been a battle on Sunday for sure. All the teams were close and anything could have happened," Syracuse president Bram Berkowitz said.

However, getting the second day of the tournament in was just not in the cards. After Berkowitz, who is also the regional coordinator of the Northeast region, discussed matters with the club pro and other team presidents, play was cancelled. Not only were rain and thunder storms supposed to continue all day, but several of the greens had an extreme amount of standing water.

In the individual contest, Bailey Pecor, a sophomore at Cornell, took medalist honors. He fired a 77 on a day when only three players broke eighty. The operations research and information engineering student was a former varsity golfer at Cornell last year and looks to be in fine form.

The regional events for the Northeast will conclude in Rochester, NY on October 26-27. The teams will be facing off at Ravenwood Golf Club, which is known as one the nicest public courses in New York. It looks to be an epic finish as the teams battle for a spot in the National Championship, which will be held in Myrtle Beach, South Carolina.