The second weekend of the 2016 City Tour is officially in the books! 15 cities across the country (literally, from San Diego to Boston) hosted golf tournaments on June 12th. We've provided a full recap from every city below, but first wanted to show you some of our favorite pictures from the weekend. Whether you have played in every City Tour event since last summer, or are still trying to make a decision on making your debut, take a look at what an event is like:

Whether you have a full "team" of friends, just you and a buddy, or are looking to play as a free agent (individual), the City Tour is excited to provide you an opportunity to play golf at top courses across the country. Reserve your spot in the next tournament before the June 30th early bird deadline.

History was made in Boston. 116 players took the course, making it the largest non-championship tournament in Nextgengolf history (NCCGA included). The entire group was treated to a beautiful golf course at The International, and despite high winds and brief rain the tournament went off without a hitch. Northeastern continued their City Tour roll winning again in the Best Ball format (+4), while "Bogies & Beers" took the scramble honors.

Colby Morris, a rising senior at Endicott College, played in his first City Tour event on Sunday. Here's what he had to say:

With this being my first City Tour event, it was a great experience being able to have the opportunity to play at such a great course with golfers who were still looking for a competitive outlet.  Nextgengolf's excellent service from the free range balls, accessories, as well as their welcoming staff really set the standard in my opinion of how golf tournaments should be.  I've competed in other tournaments before, but none have measured up to how much fun I had with Nextgengolf.  I just can't wait for the next tournament in July!

The Windy City took over Bolingbrook Golf Club for the second event of the season. "Grip It and Sip It" took first-place in the Best Ball division (+6), with "Team Grotto" taking first in Scramble (-1). Adam Laurenti & Taylor Mathson (Grip It and Sip It) took home top pair honors at +1, and Bryce Ellis & Zachary Senger (Team Grotto) topped the Scramble pairs at -3.

Team "Ke Andrews" edged out "Baylor" in the second Dallas City Tour event of the summer at Heritage Ranch CC. The team was led by duo Nathan Merchant & Eric Yoo (-5), followed by Baylor's Patrick Blonien & John Kirtley (-4). Merchant also finished as the low individual at +1 for the tournament. 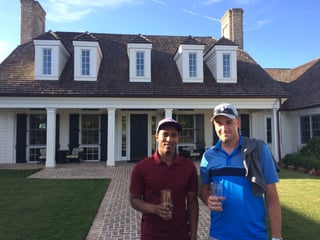 Common Ground Golf Course in Aurora provided the stage for the second Denver City Tour event of the 2016 season. Team "Varmint Cong" won the Best Ball division with an impressive -4, while Team "Nebraska Boyz" won scramble with a -6. The low-shooting duo of Evan Decoster & Zach Johnson guided "Varmint Cong" with a -6.

The Detroit City Tour had their first ever City Tour event this past weekend. Well, at least the first tournament without snow. Team "Fore Brothers" took advantage and fired a -6 Best Ball to take home the top team spot, while Team "Knickerdoctors" posted a low, low, low score of -14 in the Scramble division. Brian Lapinski & Liam Knott did the most damage, putting up a -11 as a scramble pair (9 birdies, 1 eagle, no bogeys). Taylor Hunter & Alexander Reynolds shot a -5 Best Ball score to secure top pair in the format.

Despite some rainy weather (again), the Houston City Tour was this time able to start and finish their tournament. Hosted by Tour 18 Golf Course in Houston, the players were treated to replicas of memorable holes from some of the most famous golf courses in the country. Amen Corner is replicated on the front 9 at Tour 18, as is the island green seen at TPC Sawgrass.

Team "No 1 Ballers in Golf" rolled to a Best Ball victory at +2, sweeping the top three pairs. James Hueter & Aj Kruk finished as the low scramble pair with a +4 for the afternoon.

Golf season has come in Milwaukee, and the first City Tour of the summer went down at Morningstar Golfer's Club in Waukesha. The due of James Christian & Tim Buske, from Team "Tin Cup" fired a Best Ball low round of -3 to claim top pair honors. Clay Martin & George Schley of Team "UW Milwaukee" shot -5 in Scramble, barely edging out Brendan Paule & Colton Duwe of Team "Badgers" (-4).

A big shoutout to Peter Kratsios and the team at Golf Match App for taking part in the New Your City Tour this past weekend! We were happy to see so many golf matchers out on the course all across the country.

The Philly City Tour held their first event of the season, and the teams were excited to begin qualifying for the 2016 City Tour Championship. After all, it'll be held in their backyard at Seaview Golf Resort in Atlantic City. Cole Paynter & Kendrick Stradley showed they are ready by putting up a +4 to earn low pair honors. 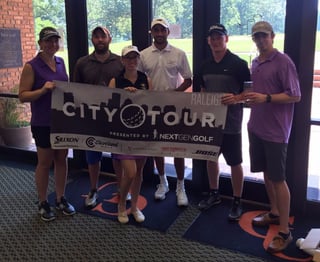 Count Raleigh as another city making their City Tour debut this past weekend. Led by club golf legend Faheem Amod, the team "May the Schwartzel Be With You" took home first place in Best Ball with a +6 at Keith Hills Country Club. Amod and his partner Jacob Lucky also finished as low pair at -1.

The San Diego City Tour kicked off at Rancho Bernardo Inn, the city's first tournament of the summer. Team "Dt Faka Down The Fairway" rolled to a victory in the Scramble division with a -11 score, led by several former members of the San Diego club golf team. Daniel Nelson & Taylor Kress finished as the low duo for the team (-6), while Clayton Murillo & Dan Hart of Team "Coupleofcliffords" earned low pair in Best Ball at +12.

Missed out on this tournament? We have two more tournaments the rest of the summer (july 10, August 7). Find your nearest city here, and get involved! Or to learn more, check out our Facebook page to see pictures from the tournaments this past weekend!