Sun Devils Look to Stay Red Hot In the Desert: ASU at Nationals 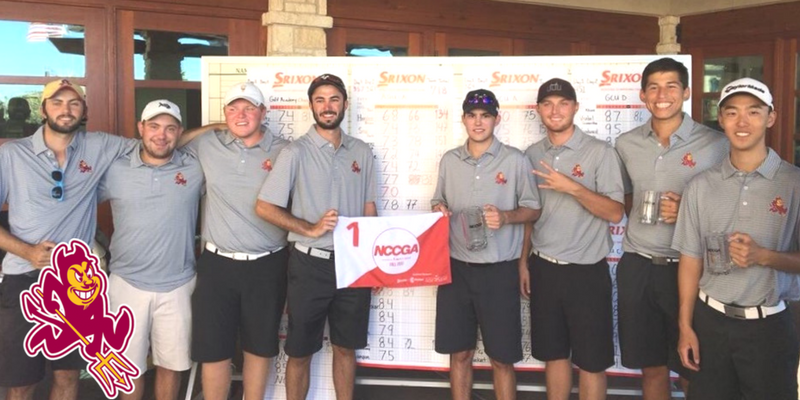 The Sun Devils have been red hot this season, winning back-to-back regional tournaments and finishing the season as the top ranked club golf team in the country with a scoring average differential of 1.55 strokes per round. Standing out for ASU this season has been newcomer Ben Harden who led the Sun Devils with a combined score of -13 under par for the two regionals. I was able to catch up Ben and ASU club president Teig Hauer and who are both gearing up for the National Championship at the Paiute Golf Resort in Las Vegas.

“The excitement level is through the roof for this Nationals,” said Hauer who mentioned that they will have quite a few supporters coming out to Nationals in Vegas.  Although there's a great deal of excitement, the ASU squad isn’t taking their ranking and success for granted.

“We take the weight of having the number #1 ranked team in the Nation seriously. We know that we’re prepared and ready to compete for a National Title”, said Hauer. "Having the best scoring average in the Nation and being the top team often comes with a certain 'target on your back'. "

Adding to the pressure comes that the fact that Nationals will be held a short 4 hour drive from Tempe. On top of that, Nationals never being held in dry desert conditions giving ASU seemingly another advantage.

“We definitely think we have an advantage over the other teams and players. The one thing people don’t realize is that you really need to keep it in the fairway and grass out here. If you end up in the sand, double bogey or worse is going to happen.” explained Harden.

Teig went on to add “Our last Nationals at Disney in central Florida was vastly different. In Vegas we will know how far our ball is going to fly, we'll be playing the same grass, the same bunkers. It’s going to be a big advantage for our team.”

Although, ASU knows this won't be a cakewalk; having to take on the likes of former champions Georgia and other top dogs Baylor, Florida, Texas and their regional rival, Grand Canyon University.

“We’re excited to beat GCU for a third time this semester.” Teig jokingly stated. He went on to explain the value of having such a competitive region and rivalry with the second ranked team in the Nation.

Along with the golf tournament, ASU will be looking forward to the other weekend activities such as the range party, the chance to meet Smylie Kaufman and ultimately getting to meet other club golfers from across the country. Look out for ASU come December 2nd and 3rd to be the team to beat in strongest Nationals field in NCCGA history.