It's March, which means a couple things. It means the club golf season really heats up, with the majority of regions beginning their spring tournaments and the road to qualifying for the NCCGA National Championship at Hot Springs Country Club.  It also means madness and the annual NCAA Division 1 men's basketball tournament.

We thought it'd be fun to take a look at the club golf schools whose basketball team landed a spot in the bracket, and see which clubs will have ultimate bragging rights at the end. Overall, 46 of the 68 schools represented in the NCAA basketball tournament have college golf club teams on campus (with several more in the process of starting the team).

Prediction: Villanova over Baylor to represent the East Region in the Final Four.

Analysis: The Midwest Region is tied with the East Region with the most club golf teams represented. The #2 overall seed lands in this region, Kansas, but the club golf power is seeded a bit higher. Oregon and Michigan both won their regions last season, with Purdue, Iowa State, Michigan State, and Oklahoma State looking to take the step up this season and claim the regional title. We're also excited to welcome one of the newest teams to the NCCGA, the Creighton Blue Jays.

Analysis: Only UCLA and Dayton club golf advanced to the National Championship out of this region last semester, with North Carolina finishing a close second in their region, and Minnesota sent two individuals to Disney. Overall the club teams in this region will be ones to watch over the next few semesters, as many of these teams are relatively new and will continue to improve and make noise in their respective regions.

Prediction: Kentucky over North Carolina to represent the South Region in the Final Four. 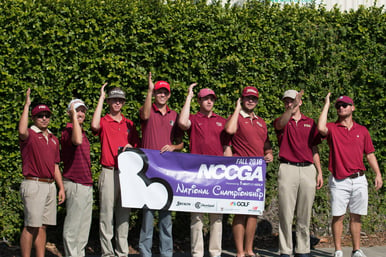 Analysis: Similar to the South Region, the West only sent two club golf teams to the NCCGA National Championship last season (Florida State & Maryland). This region also has the lowest seeded team without a club team on their campus (7. St. Mary's). Arizona used to rule the Desert Region, but has struggled lately due to graduation and changing leadership. Notre Dame is always a threat in Great Lakes, and West Virginia is talented in the Atlantic Region. It'll be interesting to watch the Gonzaga team continue to grow and develop in the Northwest Region.

Prediction: Arizona over West Virginia to represent the West Region in the Final Four.

Which school will be cutting the nets at the end of the tournament? Give us your pick on Twitter @NCCGA! We'll be tweeting throughout the first round! Also, if you have any friends or acquaintances at schools that do not have a club golf team, please introduce us! We'd love to help their campus add club golf as an option for students.