I competed in the Nextgengolf Spring Break Open for the 2nd consecutive year this past weekend in Myrtle Beach, along with golfers from 10+ NCCGA teams plus a few City Tour teams from various areas of the country. 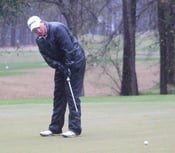 The weather was solid both days, anywhere from low to high 60s. Windy conditions made the course play more difficult than normal as you can probably tell from the scores.

No complaints though, as the Spring Break Open tournament held the weekend before had to deal with 30 degree temperatures with wind and rain on Day 2 (see the included picture of a rain-soaked Cameron Bullman putting during the final round!).

Cameron Bullman and Luke Gregory from Liberty took home the title in the first Spring Break Open. The pair finished at 143 (-1) for the weekend. Michael Neff (DePaul) and Honorary DePaul Club Golf member Blake Reifsnyder (Kutztown) took home the pair title on the second weekend, with a two-day score of 150 (+6). 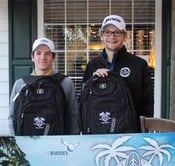 It was a great to get in a couple days of golf and sun after the Chicago weather has failed to provide that so far in 2017. Any club golf team in the northern states should consider taking the trip in 2018 as it is a great way to get some “tournament” practice in before they start tournaments the 1st week of April.

Delaware, DePaul, and Maryland credited their 2016 Myrtle Beach Spring Break Open trip as a major reason they were able to qualify for the Spring 2016 NCCGA National Championship, which was 2 months after the tournament took place.

If you decide to attend next year you’re guaranteed to see some interesting things including..…guys with Pine Valley bags cleaning their own clubs, and NCCGA Presidents shooting some rare BIG numbers (sorry Matt and Grant).

Even though this was a smaller Nextgengolf event, our great sponsors still made every player feel like it was important. Thank you Srixon/Cleveland Golf, 18Birdies, Oxford, Ogio, GolfBuddy, and 1st/10th tee bars! Now back to the bitter cold of Chicago, where fingers are crossed the snow melts and the temperature warms up before the first Great Lakes regional tournament April 1/2.