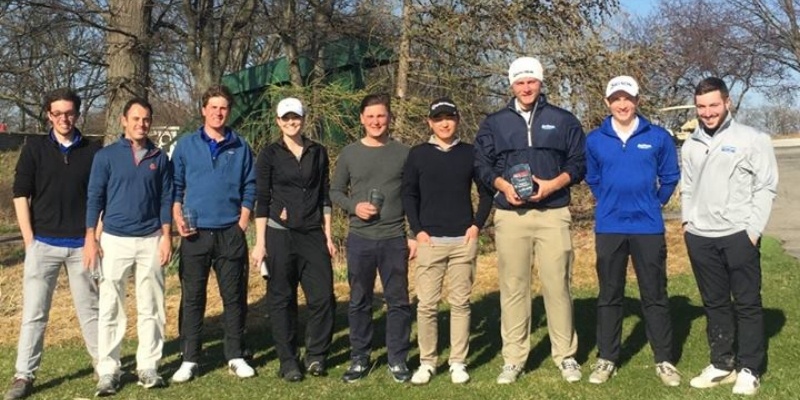 Adam Gracik was a student at Missouri when he heard about the NCCGA. He didn't pursue the club golf opportunity at the time, but when he transferred to DePaul he knew what he wanted to do: Start a club golf team at the school.

Gracik got a couple of his friends together, and began the process with the school. They were up and running in the Fall 2015 semester, but struggled with numbers. They only brought 7 players to the regional tournaments, and finished in fourth place at both events.

One of the problems the club had to overcome? Lack of golf courses within 20 miles of their school.

"We kind of have a weird situation, because we don’t have a golf course within 20 miles of us," Gracik said. "We have a 9-hole course we can use, but it’s not the best. We usually have to use the driving range in the city with mats."

The club benefited immensely from an infusion of talent over the winter season. Patrick Mullaney, a former varsity golfer at Butler University, joined the club starting in the spring season. Noreen Caporusso, a former varsity golfer at Northern Iowa, also reached out over the winter. And finally Jay Hong, born in South Korea he attended the Hank Haney Academy his senior year of high school, but elected not to play in college.

The new players helped the DePaul club upset Illinois State in the first Great Lakes Regional of the season, ending their streak of regional victories. This despite playing in terrible weather.

"The first tournament we weren’t able to practice much before that, because the highest the temperature got was 50," said Gracik. "We would sometimes travel to the dome, which is about 45 minutes away, just to practice. We also went to the Spring Break Open to practice. We did some simulator bars as a team every once in awhile."

The next tournament didn't see any improved weather. In fact, it probably got worse. A pounding rain hit the golfers during round 2, providing a challenge for everyone. Illinois State came back from a first round deficit to win the tournament and the region via tiebreaker. DePaul would have to wait for a wildcard.

The wildcard bid finally came, 5 days after the conclusion of the tournament. Gracik and the team immediately jumped on it. The Blue Demons will be making their debut this weekend in West Virginia at The Resort at Glade Springs.

Previous article
5 Years Ago: ECU Starts Run at Firestone
Next article
Years in the Making: Florida State at Nationals