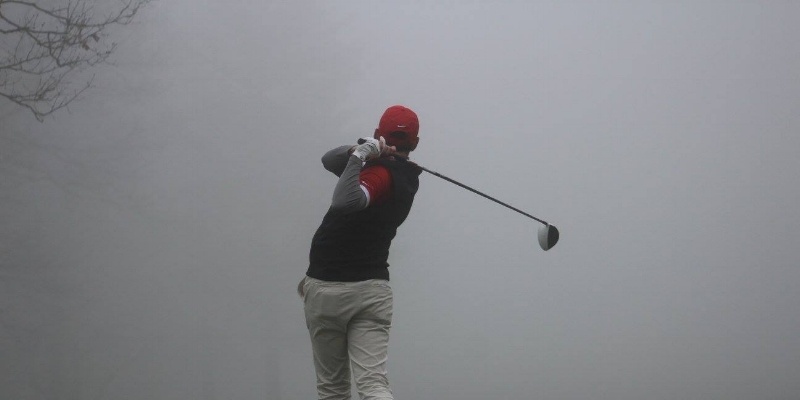 The forecast for Round 1 of the NCCGA National Championship called for 70 and sunny, with only a 5% chance for precipitation. The precipitation came in the morning, raining on the first wave of tee times. The sun came out briefly, but then the fog started. And it didn't stop.

A fog delay was called at 12:15, with the hope it would quickly lift and open up play again. 5 hours later, the round would be able to resume.

There was much uncertainty during the delay whether play would even be able to resume on Saturday. Contingency plans were made for finishing both rounds on Sunday, eventually deciding all efforts would be made to get in one or two more hours of play, and simply finish the rest on Sunday.

4:30 came and the fog slowly started to lift. The driving range and practice green began to fill up, and the great staff at The Resort at Glade Springs staged 120+ carts for the players. By 5:00 pm, the fog was officially clear and players began to head out.

Before and after pictures: Round 1 of the NCCGA National Championship. #gettoglade pic.twitter.com/IURHJ8S7yF

After the delay, teams hit the course and began re-focusing on the task at hand. South Carolina ended the first round with a team score of 379 to lead the field. Led by Brian Weaver (73) and Ford Blanchard (74), the Gamecocks took a 4-stroke lead. Florida and Stanford are currently tied for second, both putting up team scores of 383. David McCaskill (UF) and John Rafael (Stanford) led their respective teams with 74's.

Here's what Brian Weaver and Evan Rodwell, South Carolina's club president, had to say after the round:

Only 6 groups failed to finish a full 18-holes on Day 1, and will finish the remainder of Round 1 at 8:00 am on Sunday. The second round will be played as normal, with a split-tee starting at 8.