First Club Golf Regional Champ to be Crowned This Weekend

This weekend in the NCCGA there are 5 regional tournaments taking place, including one region finale. The Texas Region will crown a champion this weekend, and determine who will receive an automatic bid to nationals. The winner of the region will be the second team to punch their ticket to Arkansas, joining the defending champions Georgia.

Without further ado, let's take a look at each region and the Student Leaders picks for the weekend ahead. 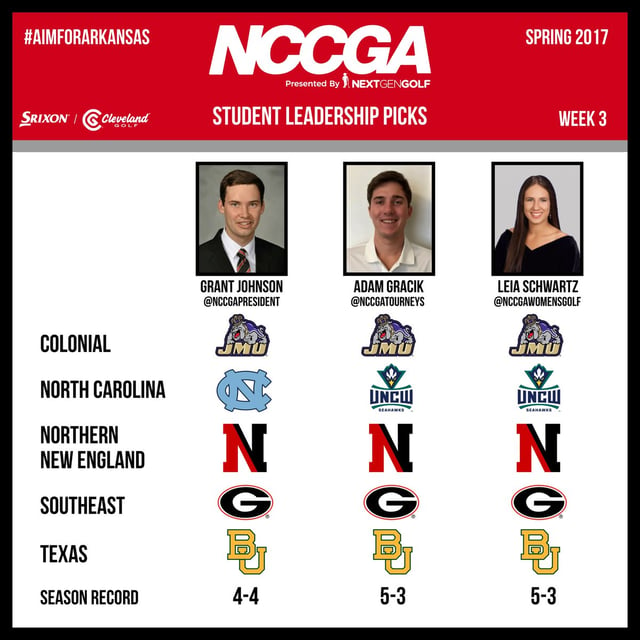 James Madison (JMU) heads into the weekend as the clear favorites after claiming 3 of 4 regional tournaments in 2016, placing T-4th at Glade Springs, and 7th at Disney. Nick Antonacci, Brian Noonan, and Wes Smith all took home National Championship All-Tournament team honors in 2016.

This weekend's tournament will feature club golfers from 9 different schools, including Cameron Bullman and Luke Gregory of Liberty, who claimed the Spring Break Open title two weekends ago in Myrtle Beach. Will the pre-season tournament experience benefit the Liberty team in the form of a regional tournament victory?

In the fall season UNC-Wilmington and UNC Chapel Hill split the regionals with one victory apiece. Unfortunately, UNC took 3rd in the 1st Regional so UNCW received the automatic bid to Disney. The region had two golfers ranked in the top 50 in the individual rankings at the end of last season, Greg Henion from East Carolina (#22) and Carey Bina from Elon (#45).

At Nationals UNCW out performed their 32nd spot in the team rankings, as the Seahawks ended up placing T-3rd out of the 30 teams at Disney with an impressive 2-day score of 777 on the difficult courses.

The North Carolina region kicks off this weekend at Bermuda Run Country Club, home of the Wake Forest club teams, where over 100 club golfers will be competing from 11 different schools making it one of the largest regions in the country. 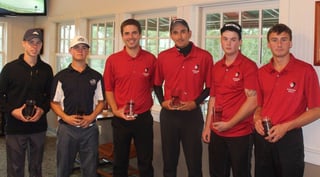 The Northern New England Region will be playing all 36 holes on Saturday this weekend, with a shotgun start in both the morning and the afternoon. Northeastern claimed 3 of the 4 regional titles in 2016, only falling to Ecole de Technologie Supérieure of Montreal in their lone NCCGA event.

Northeastern placed T-21st and T-14th at both National Championships in 2016, earning them a spot in the 2017 NCCGA Preseason Rankings. Ben Holler finished T-43rd and T-62nd at both of the tournaments, respectively. The weather will be a big factor in this tournament, as conditions aren't supposed to be ideal at tee off time.

Undoubtedly the best region in the NCCGA in 2016, the Southeast Region has both National Champions (South Carolina, Georgia), and also Golf Academy-Myrtle Beach who finished 2nd and T-4th at the two championships, respectively. Even making it to the National Championship out of this region is considered a huge accomplishment.

Scheduling conflicts have taken a toll in this region in 2017 though. Both South Carolina and Clemson have elected to play in different regions because of scheduling. Clemson moved to the South, and South Carolina will play in the Colonial+Southeast regions. Due to finals, the Gamecocks have already decided they cannot attend nationals regardless of their qualification status.

The last time we saw the Georgia team they were hoisting the NCCGA National Championship trophy at Disney. Before that they set the NCCGA record for lowest team score (-7) at the first regional of the Fall 2016 season. Club President Joe Reichard is feeling very confident about his team’s chances of repeating as national champs this spring, as the club has added a few new golfers that make the best team in the country even better.

The regional finale in Texas will take place at Bear Creek Golf Club in Dallas. Baylor claimed the first tournament by 23 shots over Texas- Austin, leaving them in the driver's seat to clinch a bid to nationals. Texas-San Marcos placed 3rd, led by individual medalist and defending national champion Tyler Ware. Ware has won all 4 NCCGA events he has played in up to this point with a scoring average of 71.63. He'll be one to keep an eye as he looks to secure his spot in Arkansas.