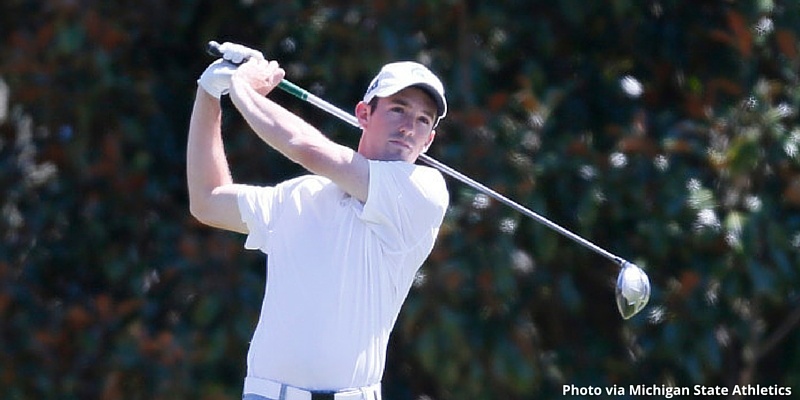 It was just one year ago that Michigan State junior Josh Heinze was winning the NCCGA National Championship. Now he's finishing his first year as a member of the MSU varsity college golf team, helping the Spartans reach the NCAA Regionals for the first time since 2009.

The season ended today for Michigan State as they finished tied for eighth in the Stillwater Regional, hosted by Oklahoma State. The top 5 teams advanced to the NCAA finals.

Heinze was a member of the MSU college golf club team for two seasons after transferring from Eastern Washington University. He had played varsity golf at EWU and transferred to Michigan State for academics, but transferred too late to nab a walk-on spot with the varsity team. It was then that he joined the club team where he thrived.

Once he got a spot on the varsity team it wasn't long before he made an impact. Heinze made his debut at the third tournament of the season for the MSU college golf team, and led the team with a 2-over performance. He finished fourth in the next tournament, helping the team win the Fossum Memorial.

Even bigger accomplishments were in store for the Spring semester.

The Michigan State team won the Big 10 Match Play Championship, and were led by Heinze's 4-0 record. The performance secured Heinze the Big 10 Golfer of the Week award. Three tournaments later, Heinze notched his firs collegiate victory at the Robert Kepler Invitational. He finished 2-over to finish in a three-way tie for first.

“We are just really happy for Josh, coming off of probably his worst performance as a Spartan last week. I think he figured out some things and put his mind in a better spot and got out of there tying for first,” MSU head coach Casey Lubhan told the Michigan State athletics website. “Unfortunately, falling in a playoff, but it was a great week for him, we are really proud of him.”

Josh finished T20 at the Big 10 Championship and spent the last three days helping the Spartans finish T8 at regionals.

From all of us here at Nextgengolf and the NCCGA, a big congratuations to Josh Heinze and all of his success at the varsity level! We enjoyed seeing your success playing club golf, and are excited to watch your career continue at the next level.