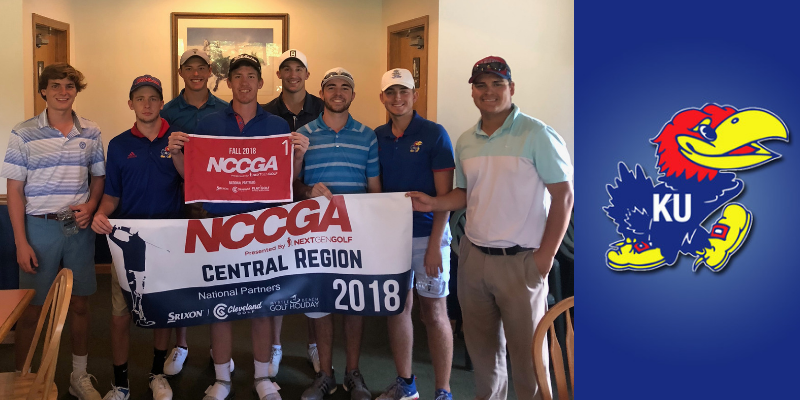 The NCCGA welcomes the University of Kansas to its first ever appearance to Nationals! After grinding through the season in Zone 3’s Central region, the Jayhawks held their beaks high hoping for that exhilarating bid to Nationals. The first regional tournament showed promise for this group of boys that knew they had an uphill battle to Myrtle. Wolf Hollow Golf Club treated Kansas’ A team well after beating Mizzou in a scorecard playoff for first place, and securing six points in the region!

The second regional tournament went a little differently however. Eagle Knoll Golf Club hosted which is in Mizzou’s territory. Here, only round one was played due to unfortunate dense fog that kept the Central region from teeing it up during round two. This was hard to swallow for Kansas because this meant they placed third, even though they were fired up for a chance to post some low scores and secure the region for the first time ever. Even though this only brought them to a total of seven points and two behind Mizzou at nine points, the Jayhawks’ national ranking at 29th turned out quite impressive with a final differential of 19.82. These quality results show the merit of this team and why they deserve to compete at the next level.

“The club has been around for 3 or 4 years so it’s nice for our team to finally make the next step to Nationals. We’ve always had a strong lineup of good players that show dedication and travel early to play practice rounds before every tournament. It’s just unfortunate that we’ve never played well together all in the same weekend and put up low team numbers,” says Kansas Club President Max Overend. The Jayhawks finally found it this semester with the addition of gifted Freshman Ethan Wegner.

“Ethan is a great player and a great component to our team. He placed second at Wolf Hollow and proved to be a key role in our win there,” says Overend. Going forward, the team’s goal is to win the National Invitational and get the bid to the National Championship in the Spring.

“It’s definitely a strong field. We made it this far though, so we are all preparing to play our best and hope for the best,” said Overend. They are paired up with James Madison University at the NIT and all look forward to playing head-to-head against the second best ranked team. Kansas is the highest ranked team at the Invitational, but only by only a .44 spread in differential.

Before ending the call, he made sure to include that he and the rest of the Jayhawks are rooting for Mizzou in the National Invitational. He says, “there’s definitely a rivalry between our two schools, but it’s all fun ya know? We wish them the best especially as a fellow Central Region team. We are just thankful for this opportunity the NCCGA is providing us. Myrtle Beach in the NIT will be fun and we just want to represent our university in a positive light.”