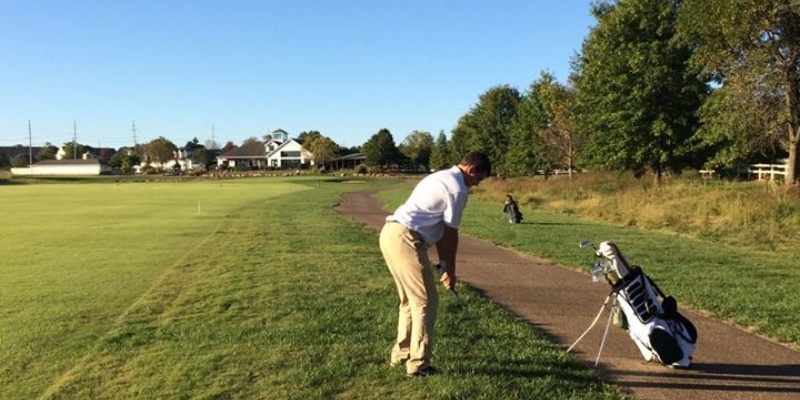 This weekend the NCCGA held 11 tournaments across the country, and as always we had several unique situations arise that required golf rulings. These aren't your typical golf rulings about cart path relief, lateral hazards, or any of the basics. These are situations that only come up once every semester. As part of our weekly series, we wanted to share the situations with you, as well as the corresponding golf rules that apply.

Here are the two scenarios below, what would you have done if this happened to you or someone in your group? The result and corresponding ruling are listed below to see if you chose the correct result!

Player A tees off on hole 1 and pulls his drive left, near the out of bounds stakes. When he arrives at his ball and tries to determine if his ball is in bounds, Player A notices that the stake closest to his ball lies out of place from the other stakes and its position does not make sense. Player A notices a hole in the ground near the boundary which would be the appropriate size for the stake. The other stakes defining the out of bounds margin are all in place and in a line which does not correspond to the displaced stake. Given the stake’s displaced position, Player A’s ball would be considered out-of-bounds but his ball would be in bounds if the stake was placed in a line with the other stakes. How should Player A proceed?

Player B hits a tee shot on his second hole of the day and his ball ends up in a muddy patch in the middle of the fairway. Upon approaching the spot, Player B cannot find his ball. How should Player B proceed?

A displaced boundary stake is a movable obstruction. Therefore, the player may replace it but he is not required to do so.

In this scenario, Player A should alert his playing competitors of the condition, allow them to observe the proceedings, and Player A should play two balls: one as his drive lies in bounds and one as if the ball was out-of-bounds. After the round, Player A should consult with the course pro to determine where the stake should have been and take the appropriate score.

Decision 33-2a/3: Extensive Damage Due to Heavy Rain and Traffic:

When heavy rains have resulted in many areas of unusual damage to the course (such as deep ruts caused by vehicles or footprints by spectators) and it is not feasible to define them with stakes or lines, a notice to players along the following lines is suggested:

"Ground under repair may include areas of unusual damage, including areas where spectators or other traffic have combined with wet conditions to affect materially the ground surface, but only when so declared by a Committee member."

Without such a notice, Committee members have authority to declare unusual damage to be ground under repair, if so authorized. However, a notice has the advantage of advising all players that relief from unusual damage might be given.

The referee of a match has authority to declare an area ground under repair during the match.

If it is known or virtually certain that a ball that has not been found is in an abnormal ground condition, the player may take relief under this Rule. If he elects to do so, the spot where the ball last crossed the outermost limits of the abnormal ground condition must be determined and, for the purpose of applying this Rule, the ball is deemed to lie at this spot and the player must proceed as follows:

(i) Through the green: If the ball last crossed the outermost limits of the abnormal ground condition at a spot through the green, the player may substitute another ball, without penalty, and take relief as prescribed in Rule 25-1b(i).

Under these applicable rules, Player B should confer with the members of his group to be sure that they are virtually certain that the ball entered the abnormal ground condition. If they have virtual certainty, Player B should determine where his ball entered the abnormal ground condition, where his nearest point of relief is, and take a drop within one clublength of his nearest point of relief, no closer to the hole.