One question overheard at the Boston City Tour tournaments this summer: "Who are those guys wearing the Hawaiian shirts?"

Those guys are Team Birdie Bandits, and don't judge them based on their attire. These guys have skills. 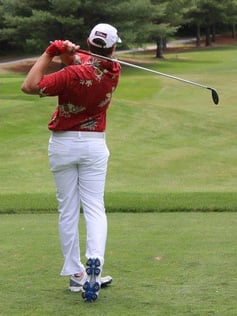 Birdie Bandits is made up of long-time friends that grew up together, and stay connected to hangout and play golf regularly. Competing at the City Championship for the team will be Phillips, Peter Brousseau, Thomas Lazaras, Marcus Murray, Matt Lazaras, and Christian Allimonos.

Phillips and Matt Lazaras have been two of the team's most consistent players, as Lazara placed in the Top 5 three times this summer, and Phillips twice. Murray won the individual title at the second Boston City Tour tournament at Shining Rock in July.

Birdie Bandits finished the City Tour season ranked #20 in best-ball, as well as #2 out of the best-ball teams that played all four events over the summer.

Heading into their second City Tour Championship, what is Birdie Bandits most looking forward to?

"A fun weekend away with the guys, and having the opportunity to play a course that is played every year by the pros," Phillips said. "(And to) Make birds, lots of them."