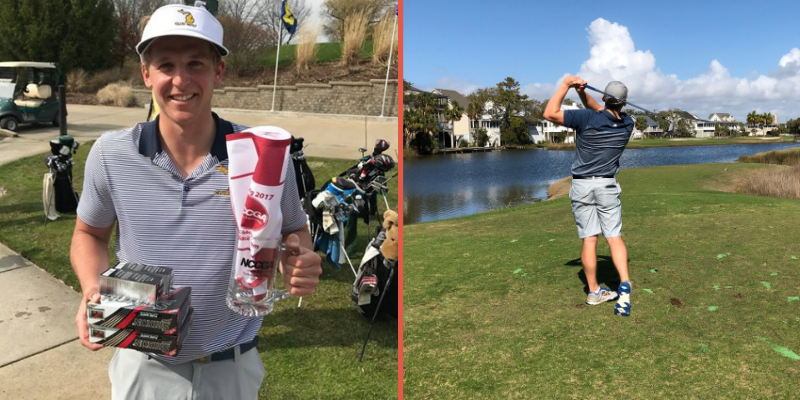 When I arrived at TPC Boston for my ambassador experience at the Dell Technologies Championship, the shuttle dropped me right next to the range, so it didn't take long find the action. About 30 minutes after getting to Srixon’s equipment trailer, Ted Potter and his caddie walked in. Instead of asking for something exciting like a new shaft in his driver or a fresh grind on his wedges, he needed a repair to his golf bag.

It was a goofy start to the day, but it became apparent that the problems that pop up on a daily basis for a pro aren’t overly different from a regular golfer. The only difference here was that instead of using a bit of duct tape to fix his bag, he had a whole team of reps using epoxy and clamps. It may have been a bit of overkill, but it was fun to both witness and take part in the banter while this clearly ridiculous situation was unfolding. Ted was a quiet guy, but he was sneakily funny all the while.

Next up, JJ Spaun was looking at new golf balls. He was trying out a couple of different Srixon balls from the one he was currently gaming – but he was also trying competitors’ balls. We all went out to the range where he was set up on a Trackman and watched while he experimented with each of these new balls. The short version of the story is that he will be keeping his current Srixon ball for this tournament and might switch to a new ball (also a Srixon) for next week’s
event. It was exciting and informative to hear and watch how the data being made with each swing was used to get closer to the right club.

Among the other experiences that day were several cool moments. I had the opportunity to watch the deadly precision that is Hideki Matsuyama’s range routine. Beyond his caddie, there were also three other guys with him – two of which seemed to do a fair bit of work with the Srixon guys. I had the chance to watch the reps build him a brand new Z F85 3-wood. It was surprising to see that it took less than 15 minutes for it to go from a loose head in a drawer to a
fully structured and usable club. As an engineer, it was moments like that which held me so interested the whole day.

The trailer was basically a machine shop that was set up for two people to work on clubs at the same time. There were saws and grinders and all manner of other tools and gauges available for use. Back to the drawers full of club heads: there is a concept in engineering known as manufacturing variance. With regards to the production of golf clubs, it basically means that no two golf clubs are going to come out exactly the same. There will be some variation in one or many of the required specifications. As long as the variability is within a certain range, known as the tolerance, then the club is able to be sold without fear that it will be tagged as a defect. The tour reps take advantage of this phenomenon by using many of the club heads that are close to the spec limit as a way to customize players clubs to an advanced degree.

Finally, I would like to thank Nextgengolf and Srixon for setting up this opportunity. It is outreach like this that keeps new players coming back, because I know I wouldn’t have been able to have this opportunity otherwise. I’d like to extend a special thanks to the Srixon reps – Rob, Jeff, and Bill for their hospitality and their willingness to show me what they do. I was able to see the clubhouse and the locker room and many pros on the range. There are many more stories that I could tell about the day at the Dell Technologies Championship, but surely I have said enough for now. So thanks again to everyone, I hope these types of opportunities keep coming!