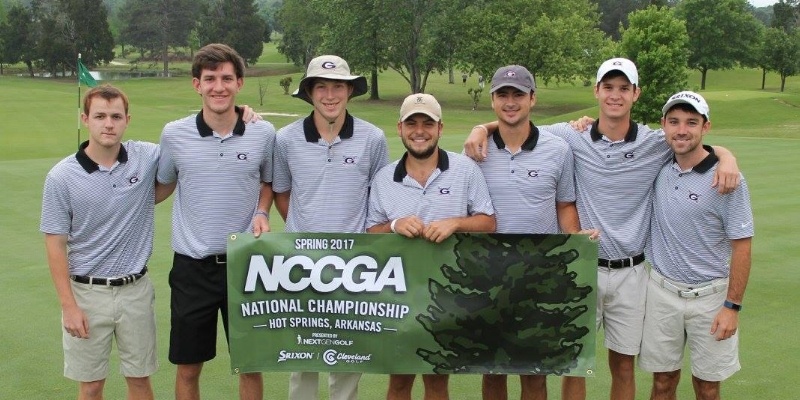 The main concern entering Round 1 of the 2017 Spring NCCGA National Championship was pretty simple: Would 18 holes be possible? The weather forecast looked rough, with calls for rain and thunderstorms starting in the early afternoon. At the end of the day everyone was not only able to play 18 holes, but the sun was even a participant for a little while, with rain intermittently.

The action on the course was even better as the Georgia Bulldogs finished the first round on top of the leaderboard yet again. The defending national champions shot a team 376, led by John Michael Klopfenstein's 73. The performance put the Bulldogs on top by one-stroke over Grand Canyon.

"With the conditions out there, it was about being mentally tough through the rain and wind and just powering through the weather." Georgia Club President Joe Reichard said. "Par was a good score through about a six hole stretch in the middle of the round and after everything cleared out, we were able to really be aggressive."

This marks the third straight NCCGA National Championship round that Georgia will be sitting in 1st place, after leading wire-to-wire in last season's championship at Disney. The Bulldogs hold a one-stroke lead over Grand Canyon University. Alabama sits in 3rd, followed by Stanford in 4th, and Florida, Missouri, and Notre Dame tied at 5th.

"We are happy where we standing in the final groups, and have a lot of confidence heading into the final day." Reichard said.

The story of the day had to be Missouri's Dillon Eaton tieing an NCCGA National Championship record with a 66 on the Park Course. Eaton's round ties Zac Lewis' 66 in the final round of last year's championship at Glade Springs.

Eaton's day included 7 birdies and only 1 bogey, including a stretch of birdieing 5 of his final 7 holes.

"It was just a really solid ball striking round." Eaton said. "I hit a lot of greens and had a good look on pretty much every hole."

Here's a look at Eaton's scorecard from his round:

Eaton leads the individual leaderboard by 2-strokes over Alabama's Conner Elder, who had an impressive 68. Elder's round included an eagle on the 9th hole of the Arlington Course, helping lead the Alabama team to a 3rd place standing going into the final round. Zach Capel (Grand Canyon, 69), Ian Martin (Michigan, 69), Brendan Bond (Nebraska, 72), Alex Merriman (Florida State, 72), and Alec Cramer (Notre Dame 72) round out the top 5 individuals.

The second round of the NCCGA National Championship will start at 7:30 on Sunday. Players will switch courses from what they played on Round 1, and will be paired according to score (top 2 teams together, etc.). The final tee time is 9:45 am, which means the tournament should conclude around 3 pm with a National Champion being crowned.

The top 3 teams will be recognized, as well as the top 16 individuals. Teams and players are encouraged to stay until the awards ceremony if possible.