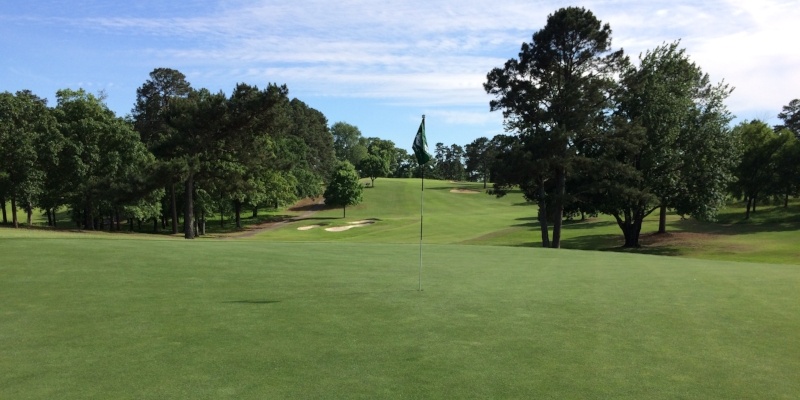 The 2017 Spring NCCGA National Championship will bring together 32 of the best club golf teams from across the country. Before the tournament begins, let's run through the list of teams that are competing. If you missed, please check out our College Golf blog to see more in-depth previews of teams not on this list.

Alabama enters the NCCGA National Championship ranked #1 in the NCCGA rankings, and are looking to improve upon their 2nd place finish at nationals last spring. The team finished 6th at Disney, and rolled through a tough South Region this semester by an average of 16 strokes.

Led by Conner Elder, who has shot rounds of 72-71-73-73 this season and is ranked #12 in the country (#5 of players that competed in both of their region's tournaments), expect Alabama to be in contention this weekend at Hot Springs.

The Bears survived a scare by Texas State to win the Texas Region, securing an automatic bid to Hot Springs. It was only three years ago that Baylor won the NCCGA National Championship at Crystal Springs in New Jersey, and this year's squad will look to replicate that result. Bruce Popp leads the team, and finished second at both regionals behind only defending national champion Tyler Ware.

The Blue Hens broke through in a big way this season, winning both Philly Region tournaments to claim an automatic bid to the NCCGA National Championship. Delaware won the first regional by 5-strokes, setting up a close race for the regional title. Instead they left little doubt, cruising to a 34-stroke victory in the second tournament. Tianlin Zhang leads the team, winning the second tournament by 3-strokes with a 73-71 (E) weekend. The championship will also serve as the final tournament of former NCCGA President Matt Hahn.

The North Carolina Region was in a very unique situation after completing both of their regionals: a three-way tie for the regional championship. Three teams ended up with 6 qualifying points, a result of each regional tournament winner failing to place in the other tournament. Regardless, the team that emerged from the tiebreaking procedures was East Carolina.

The Pirates found themselves in an almost impossible situation after the first regional of the season. They had finished in 4th, by a single stroke, and now needed to not only win the next tournament but hope UNC Chapel Hill didn't place. ECU did their part, shooting team rounds of 370-373 to win by 10-strokes. The team is led by #1 player in the country William Jacobson, who only played in the club's second regional, as well as Nolan Wyatt.

The Golf Academy-Myrtle Beach club golf team finished second at last season's NCCGA National Championship, behind only fellow Southeast Region member Georgia. However, the region was hurt by multiple teams transferring and schedule issues, which resulted in the Southeast Region being deemed a non-qualifier.

It meant that despite winning both regional tournaments, the GAA-Myrtle Beach team would not receive an automatic bid, and would instead have to wait and hope for a wildcard. The waiting and hoping paid off, as the team was extended a wildcard invitation due to their #40 ranking. Andrew Harvey leads the team into Arkansas.

After winning the region the past two seasons, Indiana found themselves in a unique situation. Forced to play the waiting game. Notre Dame made a strong charge in the second tournament to win the Indiana Region. Indiana claimed one of the final wildcard spots available, and the Hoosiers will look to build off their strong play at the previous two championships. They finished T-6 at Glade Springs and T-14 at Disney. The team will be led by Zach Stark, who is ranked #6 in the country.

The Michigan club golf team was powered by Luke Stull, who helped lead the team to a clean sweep in the Midwest Region. Stull shot rounds of 73-70-68-73, a combined -4 on the season. The bad news for Michigan is that Stull isn't able to attend nationals so the team will lean on Ian Martin, who also impressively placed 4th and 3rd at regionals this season. The Wolverines enter nationals ranked #10 in the country, and are coming off an 11th place finish at the Fall 2016 National Championship at Disney.

It was business as usual for the Missouri club golf team, winning both Central Region tournaments to qualify for the NCCGA National Championship. The Tigers won both regionals by an average of 23.5 strokes, and are also coming off a 5th place team finish at last season's National Championship. The team is led led by Dillon Eaton, who placed 8th at Disney last season, but had five different players grab an All-Tournament team honor this season.

The three way tie in the North Carolina Region worked out fine for NC State, as they placed a consistent second in both tournaments to nab a wildcard invitation. The Wolfpack take a lofty #12 ranking into Hot Springs. The team is led by Emery Hollar, ranked #26 in the nation, as well as by Piyush Sangwan and Christopher Harmon.

The final team to qualify for this season's NCCGA National Championship will also be making their championship debut. Nebraska finished second in the first Twin Cities Region tournament, before faltering to place 4th in the finale. Their #43 ranking put them in a tough situation, but after a couple teams were forced to reject their bid the Cornhuskers received the good news. The team is led by Brendan Bond, who earned medalist honors in the first regional of the season.

The Wildcats from New Hampshire claimed their first NCCGA National Championship bid since the Spring 2015 semester by dethroning Northeastern for the Northern New England regional title. The team is led by Dan McKenna, who placed 3rd and T-5 at this season's regionals.

Back again is Northern Colorado, who made their nationals debut last season at Disney. The Bears finished in second at both Mountain Region tournaments, but received the invite when CSU-Fort Collins couldn't accept. Rammi Hazzaa leads the team. Hazzaa finished T-5 and 4th, respectively, at the season's tournaments, and finished T-62 at last year's National Championship out of 256 players.

The Panthers found themselves in a tough position after the first Atlantic Region tournament, if they wanted to keep their streak of National Championship appearances in tact. Pittsburgh finished third behind Penn State and Robert Morris, and would need a strong performance in the season finale. They received just that, shooting rounds of 401 and 380 to win by 6-strokes over Robert Morris. The score was also good enough to win them the total strokes tiebreaker advantage over Penn State. The team is led by Max Johnson, who finished 1st and 2nd at this season's regional tournaments.

After missing nationals last year, Stanford is back and ready to make up for lost time. The Cardinals won the first regional by 46-strokes over Cal Poly, and the second by 14-strokes to punch their ticket. David Leede leads the team, currently the #10 individual in the country. Last Spring Stanford placed 3rd at the NCCGA National Championship at Glade Springs.

Entering the final week of the season, the Wisconsin-Madison club golf team was ranked #1 in the country, an extremely tough task considering the weather and lack of practice teams in the north usually have. The Badgers won the North Region by an average of 45.5 strokes, and enter the National Championship ranked #5 overall. Nils Arneson leads the club, shooting 70-72 in the second regional tournament to win medalist honors.