Entering the weekend, not many people gave the Georgia Club Golf team a chance to win. Despite entering the NCCGA National Championship as the defending champions, the Bulldogs had lost both regional tournaments, were ranked #58, and were only bringing 7 people to Hot Springs Country Club. The odds and momentum were stacked against them.

But by the time Sunday rolled around the Georgia Club Golf team was raising the championship trophy again, walking away with their second straight title by two-strokes over Grand Canyon University.

"Everyone kind of stepped up this weekend, only had 7 coming in but played extremely well this weekend and are happy to take home the trophy this year again." said Club President Joe Reichard.

After entering last season's National Championship as the #1 team in the nation, it was a reversal of roles for the Bulldogs to enter this year's tournament as an underdog. They definitely took notice, and actually relished that role.

"We didn't send a lot of guys to the regional tournaments, we were already qualified and had some bad scheduling conflicts. It's kind of like what they say in football, if someone is out the next man steps up. We have an extremely deep team, we've got a lot of good golfers. Everybody was ready." Reichard said. "I think it's good for us to go into tournaments as an underdog because we can take people by surprise."

Georgia was led by the duo of Jordan Davis and John Michael Klopfenstein. Both players tied for 16th after shooting 150 for the weekend. Klopfenstein led the Bulldogs on Day 1 with a 73 in his first NCCGA tournament.

"It was fun, it was just good to get back to competitive golf. It's been a couple years, and I really had a good time out here." he said. "It was definitely some ups and downs but you just had to keep grinding out there, every shot counted."

Davis led the team in Round 2, shooting a 71 and helping the Bulldogs repeat as champions.

"(In round 2) I had everything rolling in. I think I had like 10 putts on the back 9, it was a lot of fun out there." Davis said. "The hole started to look pretty big, and I really just grinded it out and finishing strong."

Davis was the only Bulldog named to the All-Tournament team, narrowly edging out teammate Klopfenstein in a scorecard playoff for the 16th and final spot.

The Lopes from Grand Canyon finished in second by two strokes in their first-ever National Championship appearance. Florida finished third, followed by Oklahoma State and Alabama to round out the top 5. The two-stroke margin of victory was the narrowest of the last several years, while three shots separated the top 3 teams.

The back-to-back championships represents the first successful title defense since the Spring 2011 season, when East Carolina won two straight. There has never been a 3-peat in the history of the NCCGA National Championship. Will it happen for the first time in the Fall?

"Hopefully we can repeat, I know we have a lot of guys coming back." Davis said.

"I don't see a lot of guys graduating, think we'll get a lot of returning faces. I think we're gonna look pretty good on paper in the fall." Reichard added.

Eaton Holds on to Win Medalist

Missouri's Dillon Eaton grabbed the headlines after Round 1, shooting a 66 on the Park Course to lead the field by two strokes. Eaton's first round included 7 birdies and only 1 bogey, including birides on 5 of his final 7 holes.

"It was just really good ball striking." Eaton said. "I hit 16 greens and pretty much had a good look everytime. I really wasn't making any crazy putts, but I just had a bunch of really good looks inside of 8 feet that I made all of them."

The 66 tied the record for lowest NCCGA National Championship round, set last Spring by medalist Zac Lewis. But unlike Lewis, Eaton still had another round to go.

Making the switch to the Arlington Course for the second round, Eaton got off to a rough start with bogies on two of his first four holes. He made birdie on #6 to pull back to +1, but a double-bogey on 13 put his lead in jeopardy. After finishing out with pars Eaton signed for a 75, 141 (-3) for the weekend, and waited for the rest of the groups to come in.

"I felt good going into the (second) round, my game has felt good lately. It got rough out there, I kind of never got into a rhythym, couldn't really get anything going but hung in there." Eaton said. "I got an up and down I think 6 or 7 times on the back 9 just to keep the round going."

Once all the scorecards were turned in, Eaton had won by two strokes over UCF's Daniel Robinson.

"It's awesome." Eaton said on winning the championship. "Last semester when I thought I had a really good chance coming in and not to play well, to be able to come back this time and kind of validate that and show that I've put some work in and was ready for it this time."

Robinson finished in second at 143, followed by Florida State's Alex Merriman at 144, Michigan's Ian Martin at 145, and Grand Canyon's Zachary Capel at 146. 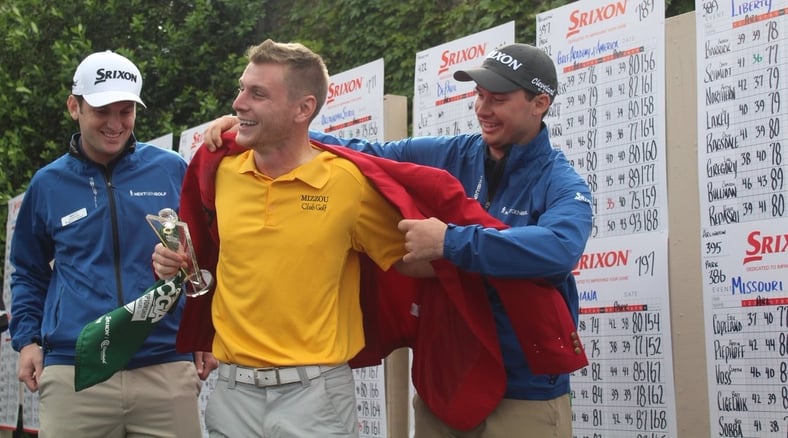