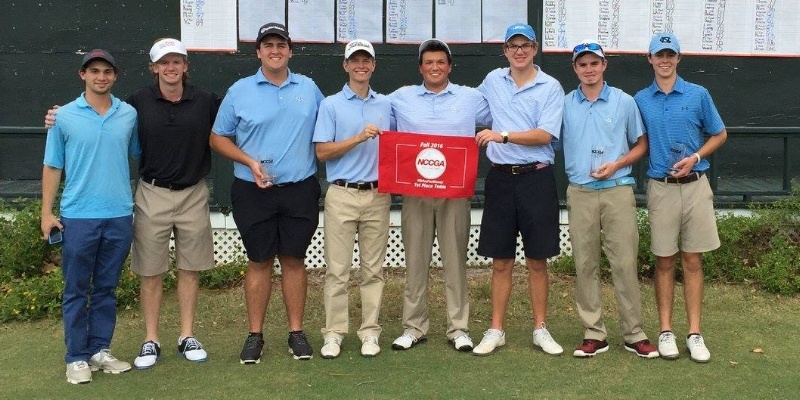 The University of North Carolina-Chapel Hill club golf team has come a long way to get to the National stage.

The team is led by senior Michael Sanders, who made it the team’s goal to get to Nationals this spring. But he also had a lot to say about the last president and the impact he had on the team.

“The team’s narrative really starts in 2014-2015 when the team only played in one regional tournament in the course of 4 semesters. Then Jordan Warren took over as president and took on the tough task of pouring the foundation to a solid team that could compete on a regular basis." Sanders said. "There was no semblance of a team to call the ‘golf team’ when I was a freshman”.

The NCCGA National Championship was a common topic for Sanders and his teammates, and they got off to a flying start - winning the first regional tournament by 10 strokes. It was looking great for the team, getting 6 points from the first event in a very competitive region and then the second tournament at Bryan Park, host of the Spring 2015 NCCGA National Championship.

UNC put in another great performance shooting a team score of 769, 6-strokes higher than their winning score a few weeks before, but little did they know that this would be a very competitive event and they ended up finishing 26-strokes behind the first place team and outside of the top 3.

Finishing outside of the top 3 earned them no qualifying points towards their National Championship bid, and put them into an unprecedented three-way team tie to crown the regional champion and earn a bid to nationals. They lost the tiebreaker, which went down to the team’s aggregate score from both spring regional tournaments.

Despite losing their golden opportunity to win the North Carolina Region, Sanders says he wasn’t too upset.

“I always sensed our team was a little more laid back than others. Golf is not our primary objective here at UNC. We are students first, then we are employees or volunteers or whatever other responsibilities we have, and then golf comes after that in levels of importance." Sanders said. "We are just happy to be having fun, playing the game we love, and being in a competitive atmosphere.”

Michael said he wanted the team to be competitive, but his biggest goal was to continue building off of Jacob’s work to create more stability and he did so by creating more of a communal atmosphere and making it a point for teammates to spend time together off of the course.

“Incorporating people who weren’t competitive in high school to make it more inclusive and accessible on campus has really helped us get over the hump." Sanders said.

After the season finished the team was still proud of themselves, but they thought everything was done and there was no shot at Nationals.

“I had just hung up the phone thanking my teammate for his efforts for the season and we would get it next year." Sanders said. "Then I received your invitation and called immediately to accept it.”

It’s been a rollercoaster of a season for the UNC team: joy and elation for winning their first regional tournament in a long time and thinking they had a firm grasp on the bid to nationals. Then playing well, but losing out to a few teams and being put into a 3 way team tiebreaker for the regional champion crown, and losing out, thinking Nationals was out of the picture.

Now they are heading to Hot Springs, Arkansas with smiles on their faces and an eagerness to have fun on the big stage. Sanders also said that he’s got a few younger guys on the team going and he’s hoping it will give them the itch to have a solid team with nationals qualification on their mind each semester.