A teammate coming down with food poisoning the night before Round 1 of the NCCGA National Championship wasn't the start the Georgia club golf team drew up.

The Bulldogs came into the championship at Walt Disney World as the top-ranked team in the tournament, having won the competitive Southeast Region over defending champs South Carolina, and set a record in the process for lowest tournament team score (713, -7).

The bad news before Round 1 meant Georgia would only have 7 players to start the tournament, one less than almost all other teams in attendance.

Turns out it didn't matter, as Georgia rode a fast start to win the Fall 2016 NCCGA National Championship.

The Bulldogs tore up the Palm course in Round 1 with a team score of 366, opening up a 12-stroke lead on second place Golf Academy-Myrtle Beach. Florida State sat in third.

Georgia was led by the duo of Andrew Grice (68) and Bailey Ulp (69), two of four players in the field that shot under-par in Round 1. Grice's 68 in particular was impressive, as he played without a teammate in his grouping due to the last-minute WD.

Georgia returned to full-strength for Round 2, this time on the Magnolia Course, as they attempted to hold off the challengers. The Bulldogs were paired with Golf Academy in the last tee times of the tournament, setting up an epic finish.

As teams trickled into scoring, the big asterisk accompanying every low team score was one question: 'What about Georgia?' UNC Wilmington came in low firing a 383, as did South Carolina with a 386. But everyone was waiting for those final groups.

And for good reason, as the final groups were composed of the National Champions and National Runners-Up.

Golf Academy kept their hold on 2nd place, guided by the pair of Daniel Childress and Jordan Quinn (both +8). UNC Wilmington surged up the leaderboad to finish in third, defeating Florida State in a 6th man tiebreaker. Missouri finished fifth. 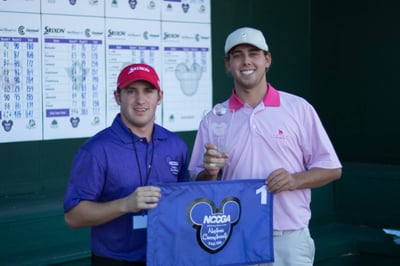 The battle for medalist honors was a tight one. After Round 1, the favorites had to be one of the Georgia duo that shot in the 60's to kick off the tournament. But Day 2 proved to be difficult, and the golfers that stayed patient and limited mistakes were rewarded at the top of the leaderboard.

One of those golfers was Texas State's Tyler Ware. Competing as an individual Ware shot an even-par 72 on the Magnolia Course on Day 1, four-strokes back of the lead. His second day got off to a tough start, as he shot 3-over through the first nine holes on the Palm course. But then it clicked, and Ware went to work on the final nine holes of the championship. Four birdies and five pars later Ware was in the clubhouse at 71, finishing the tournament at 1-under par.

Wave after wave of golfers finished their round, and by the end no one was able to go lower than Ware's -1. Oregon's CJ Sitton finished second with a 71-74 (+1), earning a year's supply of Srixon golf balls for being the low-scorer using Srixon. Georgia's Bailey Ulp finished third at 69-77 (+2). 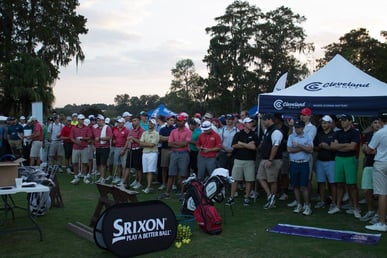 The Fall 2016 National Championship kicked off on Friday with the NCCGA appearing on Golf Channel's Morning Drive. NCCGA President Matt Hahn and South Carolina club president Evan Rodwell spoke with Will Wilcox of the PGA Tour and Charlie Rymer, discussing the championship and then taking some turns in the simulator.

Wilcox then hit the course at Disney, hitting some drives with a few teams playing practice rounds on the Magnolia #10. A huge thanks to Wilcox for spending his time with the students and providing them a memorable experience.

Registration began at 3 pm by the Magnolia driving range, where students picked up their gift bags and enjoyed the food provided by Disney. Students then had the opportunity to hit the driving range, checked out some great products on display from some of our sponsors, tested their skill at gauging yardages at the GolfBuddy tent, received swing analysis from Golf Channel Academy, visited the GolfNow booth, and took turns in the Cleveland/Srixon tent trying to chip into the target for some great prizes.

The real highlight of the night had to be the raffle though. Over $2500 in prizes were given away, with almost every team staying to see if they had the lucky ticket. Congrats to all the winners, and thanks to all of our great sponsors that provided products for the raffle!

It was great seeing the students hang out and meet each other, and the Friday night kick-off party continues to be a great way to officially start off the championship weekend.