Each year we recap the top performances of the NCCGA, and this year there were some particularly low scores. The lowest single round in 2015 was 66, and this year we not only saw a 65, but there were MULTIPLE 65's! It was great to see such high-quality college golf play, but it did made putting the list together more difficult.

Here's the Top 15 NCCGA tournament rounds in 2016, based on round score, including both the Spring and Fall semester. We understand the list isn't exhaustive, and there were plenty of other performances that could have easily warranted a spot on this list.

Were there any performances that we missed? We'd love to hear from you on Twitter @NCCGA!

Sobba led Missouri in the second Central Region tournament with a blistering 65 in the opening round. The score was one of the lowest rounds in recent NCCGA history, as well as a remarkable 7-under par. Sobba had 7 birdies, 1 eagle, and 2 bogies during his round, and finished up the tournament with a second round 71 to earn medalist honors.

Malley was looking for a strong second round after shooting 74 in the first round of the Southwest Region tournament at Los Robles Greens. She certainly accomplished that shooting a 65 (-5) to rise up the leaderboard, win the indiviual title, and help guide UCLA to their first tournament victory in more than two years. Malley had six birdies, including three in the first five holes, and only 1 bogey during the round.

These rankings are done solely based on round score, but if any bonus points were given based on the situation it would be here. Lewis not only shot a 66, but he did it in the final round of his club golf career at the Spring 2016 NCCGA National Championship to win the individual title. Lewis' round consisted of two eagles, three birdies, and one bogey, and broke the NCCGA National Championship record for lowest single round score.

The North Florida Region is always competitive, but Milner set the bar in his performance to close out the Spring 2016 regional season. Milner shot an opening round 66 (6 birdies and no bogies), and followed it up with a 71 to finish -7 for the tournament and win college golf medalist honors by 4-strokes.

Johnson found himself in a tough spot after shooting an 80 in the first round of the final Gulf Region tournament this Fall, but began his comeback by going low in the second round. Johnson had seven birdies during his second round, and two bogies, to enter the clubhouse with a 67.

To illustrate how difficult the Ozark Region was this Fall, Arkansas' Austin Rhodes turned in a remarkable first round 68 and finished fourth for the tournament (and second on his team). Still, Rhodes 68 consisted of five birdies and only one bogey, including a clean 33 on the back nine.

Johnson fired a 68 in round 1 of the Atlantic Region, beating teammate Sean Weber's almost equally impressive 69. Unfortunately, Weber got the last laugh by winning the tournament in a playoff. Both players' strong tournament performances powered Pittsburgh to the team victory. 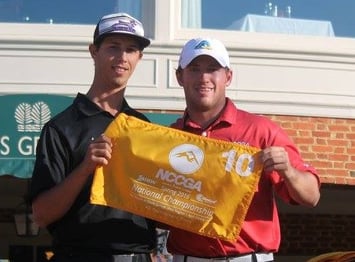 Capel followed up his first round 74 with a 68 to win medalist honors, and clinch an individual spot at the Spring 2016 NCCGA National Championship. Capel had three birdies in the round, but also carded five birdies and an eagle to go low.

The Oregon club team was on a mission in the first Northwest Regional tournament: Go low and secure a spot to the NCCGA National Championship at Disney. Sitton, the club president, did his part with a 68 in the opening round to win medalist honors by two strokes over teammate Kevin Mackin.

Galluzzo opened the North Florida Regional with a 73, but settled down on Day 2 to shoot a 68. Despite four bogies on the back nine, Galluzzo had 6 birdies and an eagle to finish in a tie for first.

Freeman helped lead the Baylor Bears to a team victory in the second Texas Regional tournament of the semester, firing a 68 in the opening round. He shot 31 on the back nine with five birdies and no bogies. 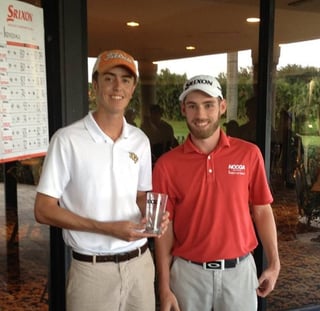 Robinson put up back-to-back under-par rounds to land a spot on this list, and win the tournament by 6-strokes. His opening round 68 had five birdies and no bogies.

Arkansas Tech's Hunter Mobley rebounded from a tough first round 83 to shoot 68 and grab fourth place in the tournament. Mobley had five birdies on the day and three bogies to lead the team.

The Alabama club golf team received a huge performance from Conner Elder in the regional finale, as Elder shot 71-68 to help the team fend off Auburn and secure a spot to Disney. Elder won the college golf tournament by 6-strokes.

The former NCAA All-American while an undergrad, Park shaved 10 strokes off his first round score to finish third in the South Regional tournament this fall. Park was one of three Auburn players in the Top 5, helping the Tigers win the tournament by 10-strokes.