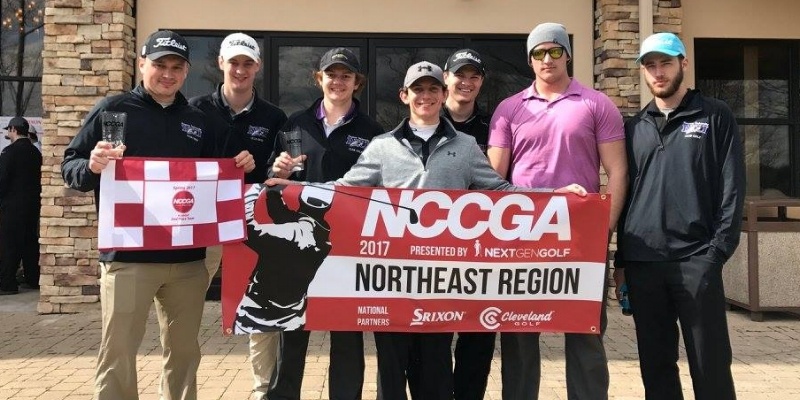 The Northeast Region has and always will be, one of the toughest regions to compete in the NCCGA during the spring season. With temperatures rarely rising above freezing in the weeks before the first tournament and late snowstorms a surprising, yet common, occurrence teams have little opportunity to get a real practice on the course. When they do finally get out for a few holes it is on a course with shaggy grass and wet lies.

All of these challenges, and the fact that every team is up against a regional powerhouse in the form of SUNY Cortland are what make it so tough for teams in Upstate New York.

Andrew Depuy is the president of the Niagara club golf team. He has worked hard to build up the program and said he put in some extra effort this academic year to get the word out about the team.

“We did really well to find a lot of freshmen who were interested and skilled. Being present at our club fair did a lot for us in addition to advertising around campus.” Depuy said.

The team played consistent, solid golf throughout the semester finishing second in both events. It was a very challenging semester with the tournaments being rescheduled several times due to late spring snowstorms closing down courses across the state.

Andrew explained how the team didn’t put everything together for the first tournament, which led to them finishing 30 strokes behind Cortland. That deficit didn’t dampen the team’s spirits though, as they still hoped they could put in a great comeback performance in the second regional.

The second regional tournament came around the next week and had to be rescheduled to two different courses. In the end, the snow that came in forced one round to be cancelled and the regional was played as an 18-hole tournament, which really impacted Niagara’s chances to make their comeback.

However, the SUNY Cortland team was unable to make it to Hot Springs for the NCCGA National Championship and that turned the bid over to the Niagara team who snapped up the opportunity instantly.

Andrew thinks this could be a catalyst for change in the region.

“I think the region will become an open race soon." he said. "We had a lot of consistency and the other teams in the region are very solid and motivated as well.”

The club president who has worked hard on developing the team over the last couple of years thinks heading to Nationals could continue to help improve the Niagara team as well.

“Going down will be fun. We are paired with the reigning national champs (Georgia) and it will be fun to see how we stack up against the big teams across the country." Depuy said. "I think getting to this stage will be a good driver for our recruiting on campus.”