Varsity golf through the NCCGA 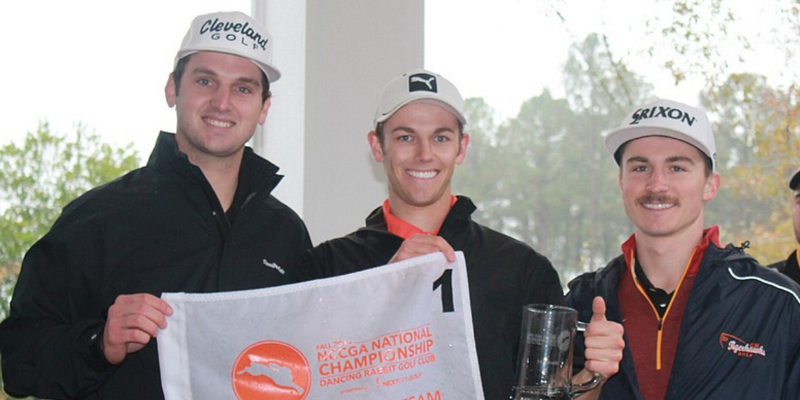 Playing NCAA Division 1 golf is a dream for many junior and high school golfers. However, even some of the most talented players in high school are overlooked by recruiters and never have the opportunity to play at that level. Sometimes the timing is simply not right, a change of scenery is needed, or academics take precedence over athletics.

Previously these golfers were out of luck, or had to try and make an impression in the summer months during amateur tournament. Now, the NCCGA is proving to be a platform that players can use to boost them to that D1 level.

Mason Short, Corey Stamper, Josh Heinze, and Laura Kanouse are college golfers who have done just that, used the NCCGA as a stepping stone in their golfing careers. Short, Stamper, and Heinze have won the last three individual NCCGA National Championships respectively. Each of them was in contact with D1 coaches throughout their time playing club due in large part to their success in the NCCGA. After winning the National Championship, coaches gave them the opportunities to play varsity.

"The reason I first started playing club golf was to just start playing more and start competing again, after having a couple years away from the game. I would’ve never guessed that it would motivate me to play at a higher level and bring back my love for golf." -Corey Stamper, NCCGA National Champion

Mason Short now plays at West Virginia University after winning the NCCGA National Championship in the spring of 2014. He's spent the past year training with the West Virginia golf team, which will makes its Big 12 debut this Fall.

Stamper came out of nowhere in the Fall of 2014, firing a 67 (-5) at Dancing Rabbit to win the rain-shortened National Championship. Stamper transferred to Greensboro College and joined the school's varsity program.

Stamper also shared with us how the NCCGA helped him rediscover his love for the game of golf. His advice for college students hoping to continue their golfing careers is to just enjoy the game. Stamper advises to, "Simply have fun with the game and have fun competing. If you do this, you’ll be more motivated to put in the time and effort that it will take to reach the next level. Also, I would say to reach out to as many college coaches as possible, whether they are D1 or D3. You never know what kinds of responses you may get from them." This strategy is what worked for Corey, and can work for anyone else looking to make the jump from club to varsity golf.

Heinze is the most recent winner of the National Championship. He transferred from Eastern Michigan, where he played D1 golf, to Michigan State to focus on his mechanical engineering career. Upon transferring he said, "I thought my college playing career was done when I went to Michigan State. However, playing in the NCCGA tournaments allowed me to prove myself and show the coach at Michigan State that I was still capable of playing golf at the highest level." Heinze took advantage of his opportunities in the NCCGA and used it as a stepping stone in his golfing career.

It does not take a NCCGA National Championship win to get the attention of varsity coaches. Florida Gator Laura Kanouse did not win individually, but has had tremendous success throughout her NCCGA career. The co-founder of the Florida club, Kanouse won three regional title in 2014-15, and notched multiple top 15 finishes at the NCCGA National Championships during her career. After two years of in the NCCGA, she will move up to play varsity at the University of Florida this fall.

“Club golf has been a catalyst in my golf career because it provided me competition when I would not have had it.” Laura said.

What these four players have done is not easy. Through their play and success in the NCCGA, they now have to opportunity to play against more elite competition. If players are seeking to earn a spot at a varsity golf program, the NCCGA provides competitive events to showcase their ability. It can almost be compared to the Web.com Tour of college golf for those players still hoping to play varsity golf. That is the beauty of the NCCGA. The style of play is appealing to a variety of players and can help fulfill an array of goals for college golfers.

Good luck to Mason, Corey, Josh, and Laura as they move on to play varsity college golf. Thank you for all that you have done to help the NCCGA grow into what it is today, and setting an example for future club golfers.