It's been a long 240 days since the 2015 City Tour golf season wrapped up. Almost eight months since Team Slice and Dice out of Cincinnati won the first ever Championship at Cog Hill in Chicago. A lot changed since then, including expansion into new cities (12 new cities) and a brand new tournament format offered to all players (scramble AND best-ball).

I'm sure like most of you, we were ready for the season to finally start.  This past weekend the 2016 season officially kicked off in nine cities across the country. Here's how it went down:

It was a windy afternoon at Indian Pond Country Club, making for a cold event and a bit higher scores than normal. Northeastern placed first in the best-ball format with a team score of 148 (+4), followed by Birdie Bandits and Dartmouth at 151 (+7). Bogies & Beers won the scramble division at 139 (-5), followed by Eighteen Birdies (-3) and Team Nf (+2). Austin Lim & Daniel Schwartz of the Dartmouth team, finished as the low pair, and Lim also finished as low individual with a 75.

There were several players participating in their very first City Tour event, one of which was James Farrell. Farrell registered as a free agent, and was able to walk away with a longest drive award, as well as some new golfer friends.

The summer is still just a couple weeks away in Chicago, but the the golfers braved the chilly elements at Harborside International. Da Bears placed first in the best-ball format at 152 (+8), followed by Grip It & Sip It (155). Smit Happens took first in the scramble division (147, +3), and DePaul and Friends 2 finished in second. Two pairs finished at 1-under par (Mathes/Ramirez & Weinberger/Ferland).

Perennial Dallas City Tour and NCCGA powerhouse Baylor continued their winning ways, finishing in first place of the best-ball division by 12-strokes. The Bears finished at 144 (E), followed by Absolute Beauties (156), and Rebels (158). All teams in the Dallas City Tour played best-ball format at the first tournament.

Another new city for the season, Denver began their summer at Buffalo Run Golf Course. All teams registered for the scramble format, and Nebraska Boyz won with an impressive team score of 133 (-11). Natural Hazards placed second with a 138, and Putt Pirates finished third at 146.

Brandon Beebout & Jory Daniels finished as the low pair, shooting a scramble score of 10-under par. 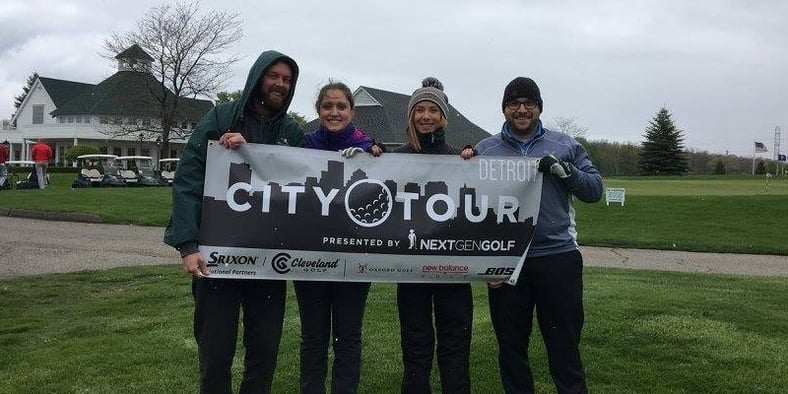 The Houston City Tour was all-set and ready to go at Quail Valley. Everyone hit the course and went on their way. Then the rain began, and all players moved off the course. Then lightning came. And finally a tornado warning. The bad weather didn't subside, and the event was cancelled out of safety concerns for all the golfers.

The first LA City Tour golf event of the season at Los Amigos Country GC saw beautiful weather, and Team Srixon took home the victory. The team shot a scramble score of 135 (-5), edging out Daly Disciples (137) and Ketle One Chippers (139). Low pair went to both Douglas Rucinski & Lawrence Melendez and Ariel Mcnair & Reuben Torres. Both pairs put up 65's in the scramble format.

The Golf Club at Middle Bay hosted the New York City Tour in its opening event of the 2016 season. All teams were registered in the best-ball format, and team Big Booty took home the victory at 150 (+6). Never Lay Up finished in a close second at 154, and Worm Burners in third with 178. The low pair was a tie at 75 between Matthew Heckman & Jarrett Malizio, and Michael Hanley & Kevin Boranian. Boranian also finished as the low individual with a 75.

Thanks to everyone who joined us at the first City Tour golf events! We are excited for the season to begin, and can't wait for the June 12th tournaments. If you haven't registered yet, sign-up before the early bird pricing expires on June 2nd. Find your city here!