My Experience as a Srixon Ambassador

The Cleveland Golf and Srixon Ambassador program has been a blast to be a part of this year.  I have been using the Srixon Z-Star XV golf ball for the last several years along with Cleveland wedges, but this was my first opportunity to try out any of their other clubs.

After trying out several of their different clubs I was very impressed with the results.  The Srixon Z745 irons were the clubs that impressed me the most. I found that they were somewhat similar to my old Mizuno Mp-58’s, but they were less offset and a little heavier. Due to these irons being slightly less offset I found it easier for me to work the ball depending on what the shot called for. This enabled me to take my game to the next level. 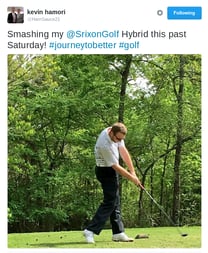 The other part that I liked about the program was being able to show the clubs off and market them at the City Tour tournaments in Houston, as well as the National Championship Event at Stockton Seaview.

At every tournament I would make sure I cleaned up my clubs real nice and showcase them next to the registration table. I would make sure to tell people about the great Cleveland/Srixon deals that they had access to trying to grow the brand even more.

There was even times that I was at the range where I would offer my clubs to the players around me to try them out and see how they liked them.

As a part of this program I was asked several times by players at the golf course if I was sponsored by Cleveland/Srixon Golf since the bag gave off that impression. I always laughed a little when they asked this, but being an ambassador made me feel a part of something and I told them just that. I am honored to have been able to participate in the Cleveland Srixon/Ambassador Program this year and hope to be selected again.

**Kevin Hamori is the Houston City Leader for the Nextgengolf City Tour, and former student president of the NCCGA.

Previous article
5 Golf Discounts Our Community Can Receive
Next article
Top 5 Golf Jerks (no, not those kind of jerks)