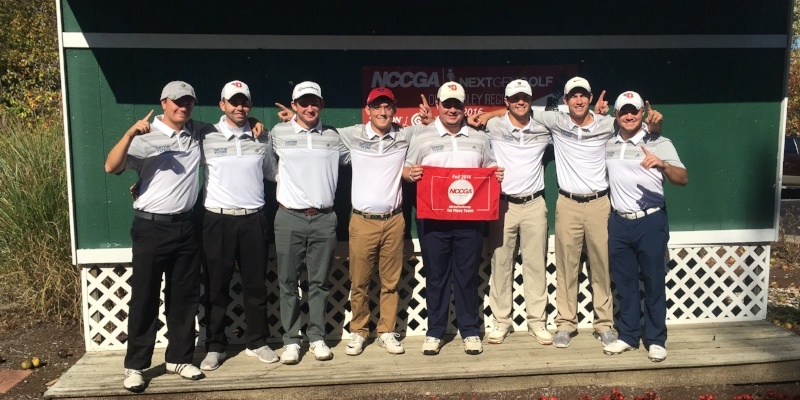 It was a busy weekend across the country. 10 teams claimed at spot at Nationals, and now there's only 6 spots remaining. The race for Player and Team of the Year is also coming down to the wire, with the final results going down to the last weekend. Check out the NCCGA's postseason awards section to review the full list of awards that will be awarded after the season.

In case you missed any of the tournament action from the weekend, here's the full rundown:

The Colonial Region finished off their season at Colonial Heritage in Williamsburg, and the defending regional champs reigned supreme again. James Madison University won the tournament by 4-strokes over Virginia Tech, shooting 394-400 as a team. Kevin Murphy led the Dukes at 74-81, followed by Ryan Frick's 75-81. Virginia Tech's Joey Jordan earned medalist honors with rounds of 72-74, 9-strokes over the rest of the field.

This is JMU's third straight Colonial Region championship, and fourth in the last five seasons. The Dukes finished T4 at the Spring 2016 National Championship at Glade Springs.

Similar to the Colonial Region, Great Lakes saw a familiar team take the regional crown once again. Illinois State won the season finale at the Den at Fox Creek, and clinch their fourth consecutive Great Lakes Regional Championship. The Redbirds trailed DePaul after Day 1 by 3-strokes, but stayed consistent on Day 2 and outlasted the competition. ISU's Hunter Simonini won medalist, defeating DePaul's Joey Fremgen in a playoff. Chris Bell of the University of Illinois, the regional one medalist, placed third.

Illinois State will be making their fourth straight appearance at Nationals. They finished T9 at last season's championship at Glade Springs.

One of the theme of the weekend was Spring 2016 regional champions defending their crown, and it was the same in Indiana. The Hoosiers won the first tournament two weeks ago, but faced a stiff task in the second event. The tournament was hosted at Birck Boilermaker Golf Complex, located on the campus of Purdue University. With home course advantage, the Boilermakers put up impressive teams score of 381-381 to win the tournament by 17-strokes. Clark Eby led the team with 76-75 weekend. Notre Dame's Andrew Stineman won medalist honors by shooting 72-76 (+4).

Despite the win by Purdue, Indiana-Bloomington emerged as regional champions via the NCCGA's tiebreaker policy. It'll be the second straight appearance at nationals for Indiana who finished T6 last season.

A dominant victory in the first regional put Michigan club golf in a great position to qualify for Disney heading into the second event. After all, their "A" team finished first and the "B" team finished second. It was much of the same in the season finale at Meadows Golf Club. The Wolverines shot rounds of 391-376 to finish in first by 29-strokes, and Michigan State finished second. Michigan's Ian Martin won medalist with a 73-72 (+1).

The final Mountain tournament of the season saw one player go low. Northern Colorado's Sean Kato put up an unbelievable weekend of 68-69 to finish -5 and win the medalist title. Kato won by 10-strokes over the next closest golfer. Colorado State-Fort Collins won the tournament, sweeping both tournaments this season and claiming the regional championship. Northern Colorado finished in second, four strokes behind CSU, and Denver placed third. 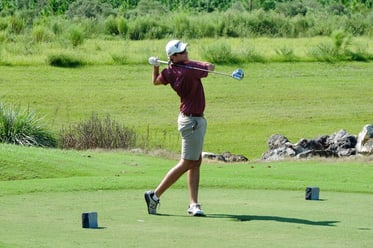 Florida State entered the second tournament of the season looking to hold off their rival, and win the region for the first time since University of Florida's club team was founded in the Spring of 2014. FSU won the first tournament of the season by 5-strokes, and led by Kyle Jackson's 76-76 (+8) completed the season sweep at King and Bear. The Seminoles outlasted the Gators by 2-strokes to win the region. North Florida's Tyler Allen earned medalist honors.

This will be Florida State's second straight appearance at Nationals, after qualifying as a wildcard team last season. This time, they'll have homestate advantage with the tournament taking place in Orlando.

The first Northwest Regional tournament of the season was rained out last weekend, so the region became a 1-tournament winner take all qualifier. The Oregon Ducks continued their impressive play to win the tournament, the region, and clinch a bid to Disney. Oregon was led by medalist Charles Stitton, who shot 71-68 to finish -5. This will be Oregon's third appearance at Nationals since their inception four seasons ago. Last season the Ducks qualified but were unable to make the trip to Glade Springs.

The Ohio Valley Region had one of the most competitive first tournaments of the NCCGA season, with the top two teams separated by 1-stroke, and the top three teams within 7-strokes of each other. The second tournament wasn't as close, with Dayton rolling to an 18-stroke victory to win the tournament and the region. Ohio State placed second, followed by Ohio in third. Dayton's PJ Green won medalist with 71-71 (-3).

The regional championship means Dayton is returning to the National Championship for the first-time since the Fall of 2012 at Pinehurst. That year's team was led by Matt Weinberger, now the NCCGA Commissioner, and finished in second place.

The story from the Southeast Region after the first tournament was the record-low scores seen by the Georgia club golf team. The defending champions, South Carolina, must have felt a little left out as they turned the spotlight back on them with a 5-stroke victory in the second tournament. The Gamecocks, already having qualified for Disney as the Spring 2016 champions, were led by Club President Evan Rodwell (78-72, +6). Georgia finished in second, clinching the regional championship, and Golf Academy-Myrtle Beach placed third. Jordan Quinn of Golf Academy earned medalist honors with his 76-74 (+6) performance.

The Southeast Region will be sending two teams to Nationals in Georgia and South Carolina, with Clemson facing an outside shot of receiving a wildcard bid.

A new regional champion was crowned in Texas, but it was a familiar place. Baylor followed up their impressive victory in the first tournament with a 5-stroke win in the second to sweep the region and clinch a spot at Disney. The Bears were led by Trevor Freeman's 68-75 (-1). The University of Texas-Austin finished second, and Golf Academy-Dallas placed third. One of the big storylines was the dominating play of medalist Tyler Ware of Texas State. Ware shot 70-69 to finish -5 for the tournament.

Baylor's win will mark their return back to nationals, after qualifying in the Spring as a wildcard but were unable to make the trip. The Bears have an impressive track record at National Championsips, winning in the Spring of 2014, and placing in the Top 3 the next three seasons.