The University of Florida club golf team is no stranger to the NCCGA National Championship. The Gators claimed the title in the Spring 2015 season, are headed to Arkansas for their 6th straight appearance, having qualified for every single National Championship since their founding in Fall 2014.

After losing most of their top players from last year, Florida spent last semester rebuilding the team and focusing on "regaining our name in the NCCGA." That focus definitely paid off this semester: Florida clinched the North Florida region with double digit victories in both regional tournaments, winning by 14 strokes in the first and 27 in the second. 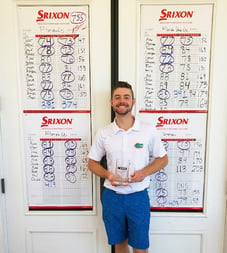 "This semester, it feels like we've all come together better." said Tyler Segal. "We've kicked it up a notch - everyone has been working on their game, putting in time, and we are at a really good point, which you can tell by our tournament scores this semester.”

The team is led by club president and North Florida Regional Coordinator Segal, future president David McCaskill, and junior Brandon Meyer. Segal claimed medalist honors in the second regional tournament with Brandon and David right behind him at T-2 and T-4, respectively.

With positive leadership, experience, and a solid practice routine, UF is ready to go and confident that they are going to play well in Arkansas.

“We’re hoping to play really well at Nationals this year and bring home the win.” Segal said. “A red jacket wouldn't hurt either."

Previous article
Georgia Club Golf Back to Defend
Next article
Get to Know Hot Springs: Host of the NCCGA National Championship