For Minnesota Club Golf: Two is better than one 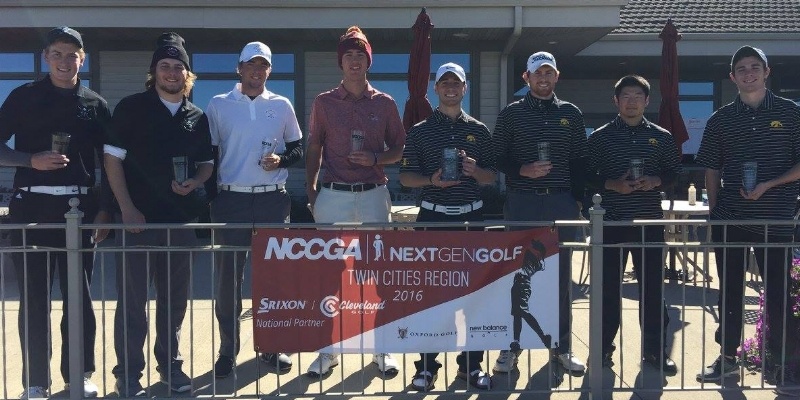 Golf in Minnesota has had it’s fair share of excitement over the past few months. Between the Ryder Cup madness that was bestowed upon Hazeltine and the surrounding communities, there has been no shortage of excitement for the game in and around Minneapolis. That includes the NCCGA Twin Cities Region.

For Bobby Frazzini and Alex Beversdorf, however, the excitement of club golf and the NCCGA hasn’t ended with the regular regional tournaments. The duo from the University of Minnesota  are making their way to Orlando and competing for the nation's top spot in club golf.

The pair are good friends already, having played golf together since high school. They are not only excited to be going to nationals together, but also the fact that they are paired together on Saturday for Round 1.

“It’s really special to be able to experience a Nationals like this." Frazzini said. "Between the location of Nationals, representing Minnesota-Twin Cities and playing with Alex, this weekend should be something special.”

It's not an easy task to start a club golf team, and one example of that is at the University of North Florida. The team has only been able to play together one time in the last year, but there has been a silver lining. Club member Tyler Allen has made his mark in the North Florida Region by qualifying for nationals as an individual for the second straight season.

After high school Allen had a lot of interest from D3 golf programs, but he decided it would be better for him to go to a bigger school. He chose UNF and thought he’d try to walk onto the golf team. Walking on didn’t work out, so when he heard from a friend about a club golf program starting, he jumped at the opportunity to play.

Last spring Tyler qualified for the National Championship at Glade Springs by finishing T2nd and 3rd in one of the country’s most competitive regions. At Glade Springs he had a good showing by finishing T14 with a total score of 151 (only 9 strokes back of the medalist).

“I played a lot better in the first tournament even though I finished T5." Allen said.

Tyler is most excited about the National Championship being in his home state and at a championship course which has hosted PGA events in the past. He’s seen the previous champions and knows he’s playing the same course some of the game’s legends have played.

Qualifying for the NCCGA National Championship as an individual can sometimes be bittersweet. While it's a great accomplisment, it means your team didn't quite play well enough to earn an invitation. That situation is one Joey Jordan, a sophomore at Virginia Tech, has been faced with.

“After we found out we weren’t going to Nationals everybody was so bummed out." Jordan said. "I won the tournament and I wasn’t even happy. The whole goal from the start of the season was to go to Disney as a team.”

Jordan had another impressive season in the Colonial Region, finishing T7 in the first regional, followed by earning medalist honors in the regional finale. He shot rounds of 72-74 in his medalist performance.

About his medalist round, Jordan said “It was a links style course with high fescue and the OB was tight. The winds were high, making it a really tough round. I was able to keep the ball low and I did a great job controlling my shots, but I had a lot of three putts."

Joey says he has never been to Florida so he is really looking forward to the National Championship in Orlando. He has been there to get on a cruise, but he doesn’t count that. In Orlando he will have the chance to play a practice round with his father, who taught him how to play the game, and his mom will be there to support him from the gallery.

What did Joey Jordan do after finishing the final regional tournament of the semester? Change his putter. The putter he switched to is his “old trusty”. A putter his grandfather gave to him when he passed away.

Joey will have to focus on his strengths this week at Disney. He says he is a long hitter which sets him up for a lot of short wedge shots into the green. He will certainly need to be on with his putting to finish high up on the leaderboard, which is why he is bringing his old trusty putter, “I’m bringing back my old friend to give me some mojo”.

With the support from his mom, dad, and having his grandfather with him in the form of his old trusty putter, Joey is hoping to have a good tournament, but more than anything he’s looking forward to enjoying a new experience.