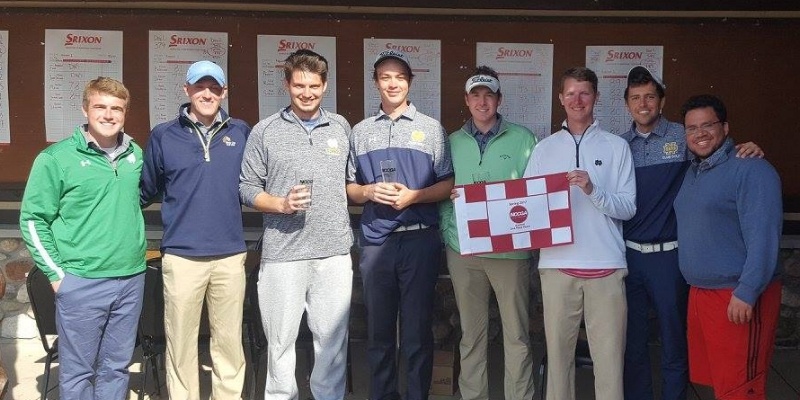 A bid to the NCCGA National Championship has been a long time coming for the Notre Dame Club Golf team. In a highly competitive region, and with a team in Indiana-Bloomington dominating the past few semesters, Notre Dame had their eye set on a Nationals bid but knew they would have to earn it.

The team hit a speed bump in the first tournament, suffering a 7-stroke defeat at Purgatory Golf Club. The result meant it was pretty clear what needed to be done: Notre Dame would have to win the second tournament only a weekend later.

Coming out firing, Notre Dame shot a team score of 377 in round 1 of their second regional, leading Indiana by 15-strokes. The team was led by Alec Cramer’s 69, and left them feeling pretty good going into the final day. Indiana wouldn't go away though, staging a comeback with a team score of 391.

The score beat Notre Dame, but wasn't enough to overtake them in the tournament. The result meant the regional champion would be determined by overall stroke differential, which went Notre Dame’s way, punching their ticket to Hot Springs CC for the NCCGA National Championship.

The team is led by Cramer and Andrew Stineman. Stineman qualified for the National Championship last season at Walt Dsney World Resort as an individual.

Notre Dame has its fair share of talent and is ready to take on club golf’s best coming out of a tough Indiana regional tournament schedule, including the 130 bunkers of Purgatory Golf Club they faced in their first tournament. Between the two tough tests in regionals and battling the early season cold weather in South Bend, look for Notre Dame to come out strong after facing adversity all spring.

Previous article
DePaul Club Golf Back at Nationals, This Time as Regional Champs
Next article
Liberty Club Golf Excited for Chance to Compete on National Stage