Two years since the club’s founding, Liberty University Club Golf will be heading to their first NCCGA National Championship after a strong performance in the Colonial Region this semester.

Liberty has come a long way since their beginning, earning their first team win this semester after three straight semesters of never placing higher than third place. The 36th ranked Eagles played solid and consistent golf this semester, averaging 386 over 4 rounds, and posting seven individual top-10 finishes. However, not a lot really changed from last semester to this.

“We added a few new players this semester, but for the most part, we just practiced as often as we could and worked our butts off.” said Cameron Bullman, the Liberty Club President. “It clearly paid off because we played some great golf and earned our way to Hot Springs. Everyone really played to their potential and we were able to win a very strong region with relative ease."

Their strongest performance included a team score of 373 in round one at the second regional. What makes this performance even more special? It was on the Stonehaven Course at Glade Springs, site of the Spring 2016 NCCGA National Championship. Liberty bested the entire field, which included South Carolina (who won the Spring Nationals at the same facility).

“Stonehaven is a tough course and overall Glade was awesome to play at. We played great that weekend, but only won by a few strokes which really proves how strong our region is.” Bullman said. "In my mind, it’s definitely one of the strongest regions in the country, and we’re all really excited for the opportunity to prove ourselves on the national stage.” 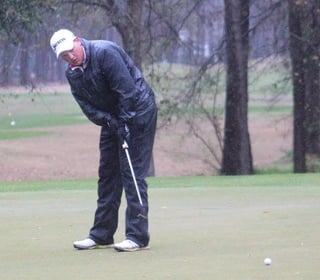 As the NCCGA is more than just golf, what the Liberty club team is really most excited about is the chance to travel across the country as a team for “the trip of a lifetime.”

“We’re all really stoked for the trip. It’s gonna be a great weekend for our team and we can’t wait to hit the road.” Bullman said.

And hit the road they will, as they’re making the 13 hour drive to arrive at Hot Springs on Thursday night. With such a young team (1 freshman and 5 sophomores), Liberty wants to use this weekend as a preview of what's to come in the upcoming seasons.

“I’m really excited for the future of this team and I think we have a good chance to show everyone what kind of skill we have, and that we’re not going away anytime soon.” Bullman said.

But Bullman and the rest of his Eagles squad aren’t taking this weekend lightly.

“We honestly think that if we play to our potential, there aren’t too many teams out there that can beat us." he said. "We have our strongest lineup and we definitely think we can win this thing.”

After two strong performances at their regionals, Liberty is entering the weekend with as much confidence as they need to play well.