Spartans Back at Nationals as Wildcard 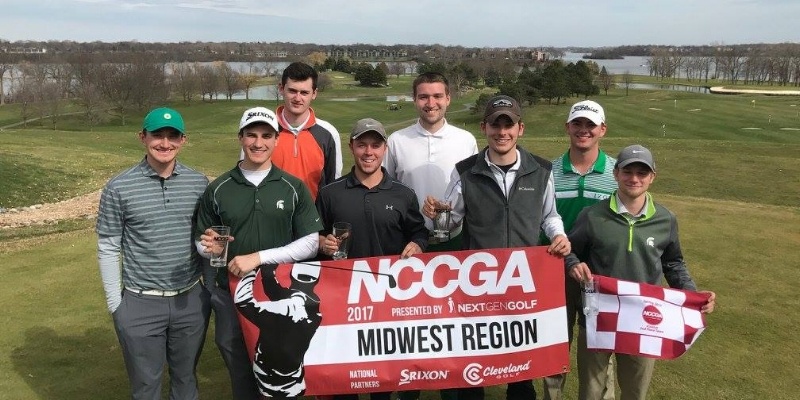 The Michigan State club golf team will be making their first trip to the NCCGA National Championship since Spring 2015 at Bryan Park, after a strong performance this semester that concluded with two 2nd place finishes and an average team score of 384.

Entering regional #2 at the Michigan State home course, the Spartans were in a prime position to lock up the automatic bid with a win, after losing by just 1 stroke the weekend before. During the week leading up to the tournament, Mother Nature took action and dropped more than 5 inches of snow.

“The course was soaked from the melted snow, and it was relatively windy,” reflected Payden Myers, the MSU club president. “With the conditions, we thought we had a pretty strong advantage since we know the course quite well.”

Unfortunately, the Spartan’s couldn’t quite get over the hump and defeat their rivals from Ann Arbor, University of Michigan, losing at their home course by 16 en route to their second runner-up finish of the semester.

Nevertheless, the 21st ranked Spartans were able to secure a well-deserved wildcard bid after a number of great individual performances throughout the season.

“We had a good opportunity to lock up an automatic bid after tournament 1, but Michigan shot lights out on Day 1 and we just couldn’t quite make up the difference.” said Myers. “We’re really excited to head down to Arkansas for Nationals, and coming out of our region we think we have a pretty good opportunity to play well.”

With finals and graduation happening right around the same time, some of their stronger players will be caught up in schoolwork and won’t be able to make the trip. One of particular significance is Josh Heinze, a former NCCGA individual champion.

“He means a lot to our team and is definitely one of our strongest players, so it’s a bummer he won’t be making the trip, but we have some younger guys that will hopefully help out with our depth.” said Myers

The Spartans will make the 13 hour drive down to Hot Springs on Thursday night and are looking forward to the challenge that lies ahead of them. They will look to their veteran players in Tyler Rozwadowski and Matthew Marsh for some confidence at Nationals, both fresh off of strong performances at both tournaments, including a 3rd place finish for Rozwadowski and a pair of top-10s for Marsh.