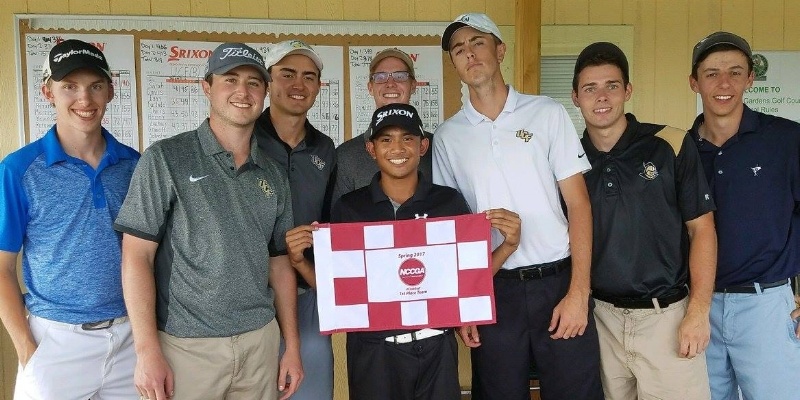 It has been a season full of firsts for the University of Central Florida:

It all began with a 20-stroke victory over Florida Atlantic at Sandhill Crane Golf Club. With FAU not at the second tournament at Heritage Isles, UCF finished round 1 in a tie with defending South Florida Region champions Keiser University. They pulled out the victory on the second day with an 8 shot advantage, punching their ticket to Nationals.

UCF club president Kevin Elliott took over the team this semester from the club’s original founder, having an interesting transition coming in as he began to manage the work involved in both running the club and competing in tournaments.

A big thing for UCF right now has been getting the word out and trying to recruit. They have been looking to get a more competitive team that will “not only get to all of the national championships, but get some top 5 finishes too.”

This is not the first time that a Knight is headed to Nationals, but it will be the first time the entire team is going. Dan Robinson has been to four national championships in a row as an individual, placing in the top 10 last fall at Disney. With Bryan Morris, Kevin Borowicz, and South Florida Regional Coordinator Chris Mari rounding out the top 4 scorers on the team, UCF is looking strong for Arkansas.

“We really came together as a team this semester.” said Elliott. “We’re all very close friends on and off the course, do the typical team dinners after tournaments - camaraderie is definitely a pretty big advantage that we have. Everyone has the potential of doing well and going low. Our 8 are very, very excited. It’s going to be a very fun weekend.”

“It would be pretty cool to not only have our first victory and not only our first time at Nationals, but come out with a victory in Arkansas as well.” Elliott added.