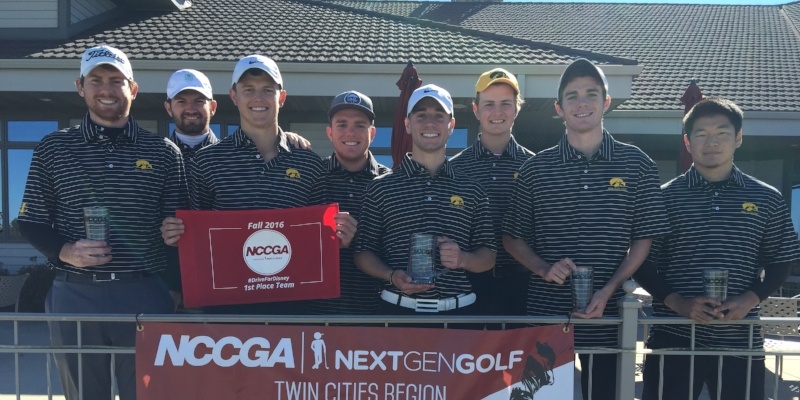 After a four semester drought, the Iowa club golf team is back in the NCCGA National Championship.

It's the club's first trip to Nationals since the Fall 2014 season at Dancing Rabbit Golf Club in Mississippi. This year, they are headed to Disney World.

In a rain shortened first Twin Cities regional tournament, Iowa and Iowa State finished in a tie. The Hawkeyes lost the 6th man tiebreaker, putting themselves in an early hole in their quest to earn the regional title. Club President Austin Shores knew the situation and what they needed to do to make Nationals.

“Honestly, we were just focused on doing what we thought we needed to do," he said. "Going out there and playing great golf and the rest would take care of itself.”

Play great golf is exactly what the Hawkeyes did in the regional finale. Iowa took first by 16-strokes, giving them the regional title over Iowa State and Minnesota-Twin Cities. Iowa's Nick Rouches earned medalist honors with his 72-75 performance at Wedgewood Cove.

After not having a team compete in the spring season, Shores and the Iowa team came back ready and focused for the fall, and is now making a trip to Nationals for the second time of Shores' NCCGA career. Despite the four semester wait for the return, Iowa is ready.

“It’s something that we worked really hard for and put a lot of effort into it," he said. "Between fundraising, hours on the range and mentally grinding it out in the regionals, we could not be more excited to return to nationals.”

Knowing that the drive for Disney wasn’t easy, the Iowa team is looking to make the most out of their trip and the chance to play golf on two fantastic courses.