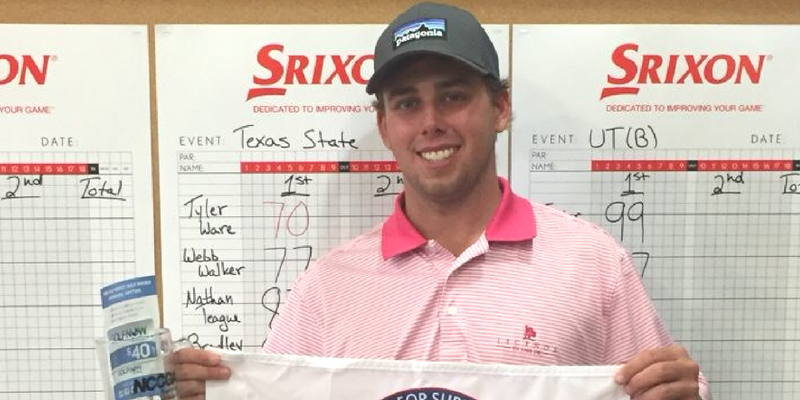 Shooting two consecutive rounds under par, finishing at -5 in a tournament, is a pipe dream for most golfers. It's a weekend that most would dream about but never come true. But for Tyler Ware of Texas State-San Marcos, that type of weekend was a reailty this season, and it helped propel him to two medalist finishes in the Texas Region, the top-spot in the final NCCGA Player Rankings, and an individual bid to the National Championship.

After an extremely successful junior golf career with over 25 tournament wins, Ware knew he had the game to compete with anyone. With confidence, low scores and an uncapped ceiling, the only place to go was up for Ware. After high school though, he decided not to pursue golf in college. Ware took the path of going into college open-minded, focusing on school, pursuing other interests and enjoying what college has to offer. After a few years break however, Ware found himself competing in golf tournaments again, and this time having a lot of fun doing it.

Ware found out about the NCCGA and club golf from friends on the Texas State varsity golf team, and decided to give it a try. He knew that it would be great to start competing again, but he was unsure of what type of golfers he would come up against.

“When looking at the tee times and the region, I recognized a lot of names from playing high school and junior golf with a lot of these guys." Ware said about the NCCGA. "It was cool to know that I would be competing against people I knew. A lot of these golfers are really good.”

Ware is looking forward to putting his game up against the best in the country at Nationals. Being one of the top-ranked golfers in the country coming into Nationals, Ware knows it will take something pretty special to be the low golfer come Sunday afternoon.

“With a field this good it’s simply about minimizing mistakes." Ware said. "I know I can make birdies and play well but it is about making sure I don’t let any get away.”

Knowing that he is competing as an individual doesn’t frighten him either.

“I’m not shy, I will love to mix it up with the best club golfers on and off the course at Nationals. I’m excited for the whole experience.”